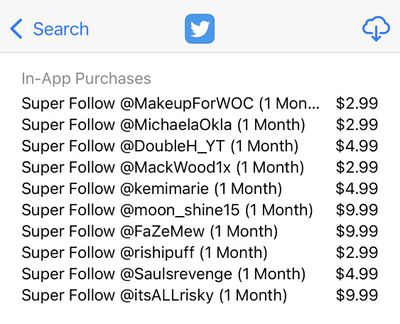 The ‌App Store‌ does not allow for multiple instances of the same subscription, leading other platforms such as YouTube and Twitch to get around this by effectively allowing users to buy a sub-token that can be directed toward a specific creator.

This means that there will be thousands of Twitter in-app purchases, dwarfing Twitter's own Twitter Blue subscription and Ticketed Spaces, Twitter's ‌App Store‌ page will only show 10 in-app purchases since it would be impractical to show the entire list.

Apple only allows developers to create up to 10,000 in-app purchases, so it is not clear if Twitter will limit the users eligible to sell Super Follows at 10,000 minus Ticketed Spaces and Twitter Blue.

Twitter announced Super Follows earlier this year, allowing creators with at least 10,000 Followers to charge up to $9.99 per month as a subscription for access to exclusive tweets. Twitter takes a three percent cut of Super Follow subscriptions up to a total of $50,000, making Apple's 30 percent in-app purchase fee markedly larger.

The feature finally launched yesterday, starting in the United States and Canada, but it will be rolling out globally on iOS in the next few weeks.

Bryan Bowler
This is the most ludicrous thing I’ve ever seen. You couldn’t pay me to use Twitter for free…
Score: 12 Votes (Like | Disagree)

contacos
Nice way to spot idiots who think they are that important
Score: 9 Votes (Like | Disagree)

Quicksilver867
Subscribing to 'exclusive tweets,' huh? I've got a bridge I can sell you, while you're at it.
Score: 7 Votes (Like | Disagree)
Read All Comments