Recent sightings of a notchless iPhone in highly popular Apple TV+ comedy "Ted Lasso" have led to sensational headlines suggesting this is a canny bit of product placement on Apple's part and that the iPhone 13 will be notchless. In actuality – and this could go without saying – the phone in question is very likely just showing a poorly superimposed display added in post-production. 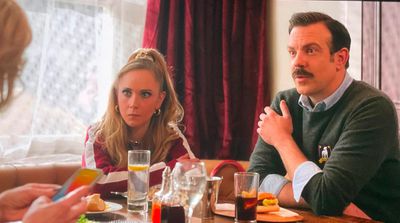 Notchless ‌iPhone‌ in scene from "Ted Lasso"
The mythical notchless ‌iPhone‌ appears in two separate scenes in the second season of "Ted Lasso," specifically in episode six, "The Signal." In both scenes, an ‌iPhone‌ can be seen with an on-screen user interface identifiable as iOS, but without a notch at the top of the display.

The idea that Apple would reveal an unannounced flagship product in a pre-recorded show is certainly a tantalizing prospect, but it's a tenuous theory at best. TV shows routinely apply artificial overlays onto digital displays in post-production in order to make their contents clearer for viewers to see – in this case, an iOS Lock Screen.

Notchless ‌iPhone‌ in scene from "Ted Lasso"
That's not to say Apple isn't penchant to product placement in its shows, but the notch has been a mainstay of the ‌iPhone‌ throughout four generations of the device, and the ‌iPhone 13‌ will be no different, with the notch continuing to remain on the front of Apple's upcoming smartphones. However, the ‌iPhone 13‌ is expected to feature a smaller notch, and several reputable sources have indicated that the notch size will shrink in 2021, including Apple analyst Ming-Chi Kuo.

Looking further ahead into the future, 2022's "‌‌iPhone‌‌ 14" is expected to finally ditch the notch, replacing it with an Android-style hole-punch camera. Where Apple goes from there is unclear, but a rumor in 2019 claimed Apple has prototyped at least one iPhone with no notch, with the TrueDepth camera sensors for Face ID instead housed in the thin bezel above the display.

That's a lot of work for someone to go through in post to remove that notch!

No, it’s more work to include the notch. Because they’re already superimposing the contents of the display. However adding the notch makes it more difficult because imperfections in the tracking/keyframing would be more obvious with a jittering notch on an iPhone display.

I do this kind of work professionally.
Score: 18 Votes (Like | Disagree)

Why does Apple decide to maintain the Face ID on the era of face-masks while it also creates an undesired notch taking valuable screen space? Simple:
FACE ID IS A GREAT EMOTIONAL SURVEILLANCE FEATURE
AI face gesture tracking meta-data has a GREAT commercial value as businesses can buy peoples facial responses to products & services, same way most smartphones hear your voice 24/7 to offer targeted advertising (nothing new).
Because it is a profitable business for Apple, it is here to stay way long and re-adapt into under-screen sensors..

The fact I had to ponder if this was satire or real, says a lot about the comments lately here and on social media.
Score: 13 Votes (Like | Disagree)

Wildkraut
A faked iPhone, because Apple is ashamed for the notch. Watching Ted Lasso in a few years from now would always remind them about the ugly notch they had.
Score: 7 Votes (Like | Disagree)

They should keep the notch until the technology is there to eliminate it entirely
Score: 5 Votes (Like | Disagree)

Who would call the most nicest and kindest show a DUMB **** ?
Score: 4 Votes (Like | Disagree)
Read All Comments

Tuesday July 5, 2022 6:57 am PDT by Joe Rossignol
The upcoming launch of Apple's redesigned MacBook Air with the M2 chip has some Windows laptop manufacturers "worried" that sales of Intel-based laptops will be negatively affected, according to industry sources cited by DigiTimes. "A Wintel brand vendor pointed out that at a price point of US$1,000-$1,500, the MacBook Air will crowd out other high-end notebooks," the report claims, with...
Read Full Article • 299 comments