Rumor: Apple Has Prototyped a 6.7-Inch iPhone Without a Notch, Face ID Housed in Upper Bezel Instead

Apple has prototyped at least one iPhone with a 6.7-inch display and no notch, with the TrueDepth sensors for Face ID instead housed in the thin bezel above the display, according to leaker and concept artist Ben Geskin.

Geskin created the rough concept below to visualize the alleged iPhone, which he said Apple plans to release in 2020. 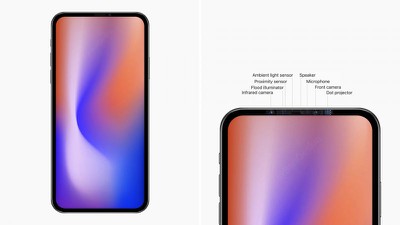 This isn't the first time we've heard of a 6.7-inch iPhone. Earlier this year, noted analyst Ming-Chi Kuo said Apple plans to release 5.4-inch, 6.1-inch, and 6.7-inch iPhones in 2020, all with OLED displays and 5G support. Kuo said the iPhones will sport all-new designs, but he did not comment on the notch.

Earlier this week, Kuo added that the 2020 iPhones will each have a new metal frame similar to the iPhone 4, suggesting the frame could have flat edges versus the round frame on the iPhone X and newer.

Bloomberg's Mark Gurman and Debby Wu have previously reported that Apple has considered releasing an iPhone with both Face ID and an in-display fingerprint scanner in 2020 if testing is successful, but the report cautioned that the fingerprint scanning technology might not be ready until 2021.

Geskin has had a few accurate leaks in the past, including front glass panels for 2018 iPhones that revealed the iPhone XR would have slightly thicker bezels than the iPhone XS and iPhone XS Max. However, until other sources corroborate this information, the rumor should be treated with some skepticism.

Miniaturizing complex electrical components and sensors is innovative... it’s literally how we got to the point where full fledge computers fit in your hand instead of taking up massive rooms at universities.
Score: 48 Votes (Like | Disagree)

Puppuccino
Please make one the size of an iPhone SE. ?
Score: 45 Votes (Like | Disagree)

Someone's signature: "Never underestimate the lengths a MacRumors user will go to to seem smarter than you."
I think you are overestimating :-)
Score: 43 Votes (Like | Disagree)

Just goes to show can't please everyone, why bother trying? People have been complaining about the notch since it was introduced. Me, the notch has never bothered me. But I will accept a bit more bezel if it means a lot less noise from whiners.
Score: 27 Votes (Like | Disagree)

bbednarz
I don't mind the notch, but boy does that look nice.
Score: 25 Votes (Like | Disagree)

IRockThat828pScreen
If they can keep the bezel as thick as it is now, im so down
Score: 23 Votes (Like | Disagree)
Read All Comments

Friday July 10, 2020 11:12 am PDT by Juli Clover
Apple this month published a support document that warns customers against closing their Mac notebooks with a cover over the camera as it can lead to display damage. Image via Reddit Apple says that the clearance between the display and the keyboard is designed to very tight tolerances, which can be problematic. Covering the camera can also cause issues with automatic brightness and True Tone....
Read Full Article • 271 comments

Thursday July 9, 2020 10:14 am PDT by Juli Clover
Apple today seeded the first public betas of upcoming iOS and iPadOS 14 updates to its public beta testing group, two weeks after first providing the updates to developers after the WWDC keynote and a day after seeding the second developer betas. Public beta testers who have signed up for Apple's beta testing program can download the iOS/‌iPadOS‌ 14 updates over the air after installing ...
Read Full Article • 201 comments

Friday July 10, 2020 2:58 am PDT by Tim Hardwick
At last month's WWDC, Apple officially announced that its Mac computers will be transitioned from Intel x86 to homegrown Apple Silicon chips. Apple said it plans to deliver the first Apple Silicon Mac by the end of the year and complete the transition in about two years. According to Apple analyst Ming-Chi Kuo, a 13.3-inch MacBook Pro with a form factor similar to the current 13.3-inch...
Read Full Article • 165 comments