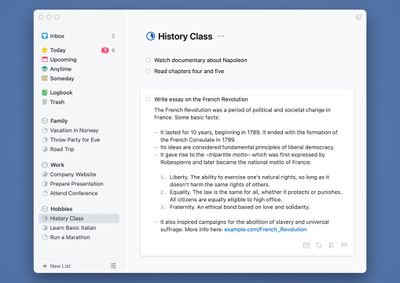 Things has supported bullet lists before now, but you can now nest lists by inserting spaces in front of a bullet, and character lines now line up with the text of the previous line, thanks to the use of a fixed-width font.

When editing bullet lists, Things will now make the process a little easier by automatically stripping out "double bullets" during copy-paste.

Meanwhile, there's a new Find in Text option that augments the existing search by searching specific notes. The option can be activated using the key shortcut Shift-Command-F, and is aimed at making it easier to narrow down a search in particularly long notes.

Lastly, Things Cloud "Fractus" is a new way of syncing text. Until now, each time the user modified a note – say to insert or remove a few words – the entire note would be synced again across all their devices.

With Things Cloud "Fractus", however, only the fragments of text that are modified get synced, which should improve the speed and efficiency of the sync, and allow for smarter resolution of conflicts.

Things 3.14 can be downloaded from the Mac App Store for $49.99 and from the iOS App Store. The iPad version is priced at $19.99 [Direct Link] while the iPhone version (which includes Apple Watch support) is priced at $9.99. [Direct Link] A 15-day trial of Things for Mac is available on the Cultured Code website.

I agree but I fear that the day where Things will unify their product is the day where they will introduce a subscription model. I wish not, but it seems inevitable. I prefer paying 80$ once though
Score: 11 Votes (Like | Disagree)

The_Martini_Cat
A hearty thanks to MacRumors for the heads-up on this update. A long-time Things user, I've come to regard Things as the Apple Watch of to-do apps. The watch beats it out only because its level of craft extends to hardware, while Things is software only. Speaking of the watch, there's a nice Things 3 complication that I use to add items. Tap the big "+" sign, speak into the watch, and later on, my item is on all three types of devices. Not counting the watch.

To those people who criticize this fine piece of software based on its price, um ... why do you bother using Apple products? ??. Ok, ok, sorry. Not supposed to troll ??
Score: 10 Votes (Like | Disagree)

I agree but I fear that the day where Things will unify their product is the day where they will introduce a subscription model. I wish not, but it seems inevitable. I prefer paying 80$ once though

Yup, and to be fair, I paid that $80 four years ago, and I still use the app every day. For me that's not a bad deal at all as a one-time purchase that's been pretty frequently updated for its entire lifespan, and the separate pricing recognizes that not everybody uses all three versions.

I suspect that I would have paid far more for a subscription over that same time period.
Score: 8 Votes (Like | Disagree)

Be careful what you ask for. This kind of thinking leads devs to subscription models.
Score: 7 Votes (Like | Disagree)

cecil444
I love love love Things, it’s such a good app! Great design, intuitive, always thoughtfully updated — not bloated with useless features. Its basically my second brain; I bought it for Mac and iPhone and it’s worth every penny. Maybe the only app I get actually giddy about every time it’s updated. Looking forward to these latest feature updates!
Score: 6 Votes (Like | Disagree)
Read All Comments

5 Useful Apps for Boosting Your Productivity in 2022

Tuesday January 4, 2022 1:18 pm PST by Juli Clover
January is when many of us make New Year's resolutions for improvements that we want to enact in the new year, and if you're looking to bolster your productivity and adopt new habits, we have a great list of iOS and Mac apps that you might want to check out. Subscribe to the MacRumors YouTube channel for more videos. We've outlined the apps, provided links, and listed app pricing below, but...
Read Full Article • 28 comments

Tuesday December 21, 2021 2:01 pm PST by Juli Clover
Zillow today added SharePlay integration to its iOS app, allowing iPhone and iPad users to browse through home and apartment listings with their friends, family, or real estate agent using FaceTime. According to Zillow, "Americans love to Zillow surf," and the FaceTime update is designed to make exploring the Zillow app with others easier and "a lot more fun." After initiating a FaceTime...
Read Full Article • 14 comments

Tuesday December 14, 2021 9:40 am PST by Juli Clover
Alongside iOS 15.2, iPadOS 15.2, macOS Monterey 12.1, and watchOS 8.3, Apple yesterday introduced an updated version of Xcode, Xcode 13.2. Developers who are updating should be aware that there's a bug with the Mac App Store version of the software at this time, and it should be avoided. According to a thread on the Developer forums, updating to Xcode 13.2 from the Mac App Store results in...
Read Full Article • 74 comments

Monday October 25, 2021 10:04 am PDT by Juli Clover
Apple today released macOS 12 Monterey, the newest version of the operating system designed to run on the Mac. macOS Monterey comes after months of beta testing and feature refinements. The new ‌macOS Monterey update can be downloaded on all eligible Macs using the Software Update section of System Preferences, and it can also be found in the Mac App Store. Like all Mac updates, ‌macOS...
Read Full Article • 441 comments

Wednesday October 20, 2021 12:50 am PDT by Sami Fathi
The increasingly popular privacy-focused browser Brave is officially saying goodbye to Google as its default search engine, replacing the world's most popular search engine in favor of "Brave Search," the company announced in a blog post. Brave Search is Brave's answer to customers wanting a "privacy-preserving" search engine, and it's built using Brave's own "independent index, and doesn't...
Read Full Article • 74 comments

Sunday January 23, 2022 2:59 am PST by Tim Hardwick
Apple has always emphasized the depth of thought that goes into the design of its products. In the foreword to Designed by Apple in California, a photo book released by the company in 2016, Jony Ive explains how Apple strives "to define objects that appear effortless" and "so simple, coherent and inevitable that there could be no rational alternative." But every once in a while even Apple...
Read Full Article • 399 comments

Sunday January 23, 2022 10:32 am PST by Juli Clover
Apple is working on a number of new products that are set to launch this fall, and Bloomberg's Mark Gurman says that it will be "the widest array" of new devices that Apple has introduced in its history. In his latest "Power On" newsletter, Gurman explains that Apple is working on four new flagship iPhones (iPhone 14, iPhone 14 Max, iPhone 14 Pro, and iPhone 14 Pro Max), an updated low-end Ma...
Read Full Article • 239 comments