Last week, Apple previewed new child safety features that it said will be coming to the iPhone, iPad, and Mac with software updates later this year. The company said the features will be available in the U.S. only at launch. 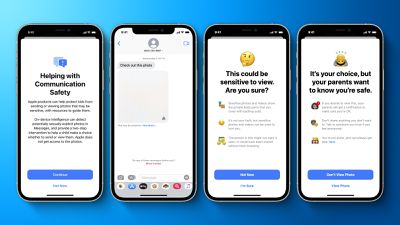 A refresher on Apple's new child safety features from our previous coverage:

Since announcing the plans last Thursday, Apple has received some pointed criticism, ranging from NSA whistleblower Edward Snowden claiming that Apple is "rolling out mass surveillance" to the non-profit Electronic Frontier Foundation claiming that the new child safety features will create a "backdoor" into the company's platforms.

"All it would take to widen the narrow backdoor that Apple is building is an expansion of the machine learning parameters to look for additional types of content, or a tweak of the configuration flags to scan, not just children's, but anyone's accounts," cowrote the EFF's India McKinney and Erica Portnoy. "That's not a slippery slope; that's a fully built system just waiting for external pressure to make the slightest change."

The concerns extend to the general public, with over 7,000 individuals having signed an open letter against Apple's so-called "privacy-invasive content scanning technology" that calls for the company to abandon its planned child safety features.

At this point in time, it does not appear that any negative feedback has led Apple to reconsider its plans. We confirmed with Apple today that the company has not made any changes as it relates to the timing of the new child safety features becoming available — that is, later this year in updates to iOS 15, iPadOS 15, watchOS 8, and macOS Monterey. With the features not expected to launch for several weeks to months, though, the plans could still change.

Apple sticking to its plans will please several advocates, including Julie Cordua, CEO of the international anti-human trafficking organization Thorn.

"The commitment from Apple to deploy technology solutions that balance the need for privacy with digital safety for children brings us a step closer to justice for survivors whose most traumatic moments are disseminated online," said Cordua.

I understand how it works, and I still hate it.
Score: 91 Votes (Like | Disagree)

turbineseaplane
...and how long before the "scanning iMessages" isn't just for kids under parental controls?

I can't believe people are blind to the bad precedents and paths we are going down here.
Score: 81 Votes (Like | Disagree)

That's not the problem. The big issue is creating a method that allows Apple to review content that's supposed to be private. It opens the possibility for someone to add 'reasons' to review any content they want to accuse a user of creating, saving, or sharing. Once it has been created and is active, the risk increases that others may figure out how to piggyback on that system and use a modification for their own purposes. All privacy is at risk then. This also sets up a situation where a court can then say "see, Apple does have a method to examine contents without permission from the device owners, therefore we can order Apple to allow an investigatory agency permission to access the content."

benh911f
Apple with the most shocking heel turn since Hulk Hogan.
Score: 72 Votes (Like | Disagree)

Why are you defending Apple so desperately? Have some dignity, how the technology works is not even the point.
Score: 72 Votes (Like | Disagree)

DHagan4755
Apple needs to make one of its fancy dancy videos that solidly explains how this is all going to work. Their current roll-out of this is a PR disaster. It sounds creepy & even after reading about how it works, I'm still not enthralled with it.
Score: 56 Votes (Like | Disagree)
Read All Comments