Apple next year is expected to ditch the iPhone notch and adopt a punch-hole design for its front-facing TrueDepth camera array. Meanwhile, Android maker Oppo continues to publicize new iterations of its under-screen camera technology, which it has yet to feature in a shipped phone. 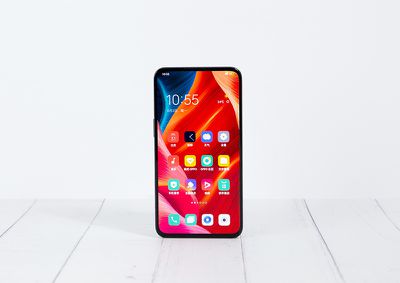 Prototype device featuring Oppo's USC
Oppo unveiled its first go at under-screen camera tech back in June 2019, and this is its third attempt at refining the system. According to the Chinese phone maker, the new version allows for a selfie camera to be placed under the display "without compromising the integrity of the screen."

In previous iterations, Oppo improved the camera quality at the expense of the display, by reducing the pixel density in the area of the screen that covers the camera in order to let more light in.

This time, it's taken a different tack, by shrinking the size of each pixel without decreasing the number of pixels "to ensure a 400-ppi high-quality display even in the camera area." It's also replaced the traditional screen wiring with transparent wiring material.

A prototype device featuring Oppo's USC
As a result, Oppo says users should notice "almost no visual difference" between the portion of the screen where the camera resides and the rest of the display, and to back up that claim, it has released an image of a prototype phone showing a black-and-white ebook app filling up the screen.

The company has also publicized a sample photo taken by the under-screen camera, although without several shots taken in different conditions, it's hard to judge its capabilities, and Oppo is still falling back on imaging AI algorithms to reduce some of the negative side effects typically found in under-screen cameras, such as blurry images and image glare.

A selfie photo taken with Oppo USC prototype
Oppo hasn't said when it intends to bring a phone to market with an under-screen camera, but it won't be the first. Chinese mobile maker ZTE took that plaudit with its own fullscreen display-enabling technology appearing last year in the Axon 20 5G.

ZTE's approach effectively used two screens simultaneously – a small square one on top of the selfie camera inside the phone's main OLED display – but the square was sometimes visible when using some apps, and the selfie shots were also improved artificially by software algorithms to compensate for haze, glare, and color cast issues.

Long-term, Apple is thought to be working towards a notchless ‌iPhone‌ design. The notch has been a controversial design decision since it debuted on the ‌‌‌iPhone‌‌‌ X in 2017, and it has always felt like a stopgap on the way to an ‌‌‌iPhone‌‌‌ with a truly edge-to-edge display, but when that will appear – and how it will be realized – remains unknown.

This year's upcoming iPhone 13 will have a slightly smaller notch, while next year rumors suggest this will be replaced by a punch-hole design that's previously been used for some Android devices, including Samsung smartphones. Where Apple goes from there is unclear.

According to one rumor dating back to 2019, Apple has prototyped at least one iPhone with no notch, with the TrueDepth camera sensors for Face ID instead housed in the thin bezel above the display.

Given that Apple is believed to be relying on a more tightly integrated camera module to achieve the smaller notch expected on the ‌iPhone 13‌, miniaturization could be one way for Apple to bring a truly edge-to-edge display to market one day while avoiding the attendant problems that come with hiding a camera under the screen, but mass-producing such technology could still be years away.

UKitsme
looks like that girl has taken a selfie with her hands behind back?
Score: 31 Votes (Like | Disagree)

Being years behind bargain Android phones is getting old, Apple has the money and the talent, let’s be first for once again. A 20x optical zoom/lens whatever would also be nice.

Apple is not interested first at doing the obvious thing everybody else has half-assed solutions to first. There's a reason they're not first, and that's because it's not good enough yet. Same with folding screen. The reason bargain Android phones are first is because it's just a marketing strategy for them being first no matter how much it sucks. Apple probably did it better in-house already, but still not good enough.
Score: 20 Votes (Like | Disagree)

redbeard331
It would be nice to see Apple surprise everyone when the 13 pro drops with a full screen display with no notch, punch holes, or anything else, just all screen. Being years behind bargain Android phones is getting old, Apple has the money and the talent, let’s be first for once again. A 20x optical zoom/lens whatever would also be nice.
Score: 19 Votes (Like | Disagree)

It would be nice to see Apple surprise everyone when the 13 pro drops with a full screen display with no notch, punch holes, or anything else, just all screen. Being years behind bargain Android phones is getting old, Apple has the money and the talent, let’s be first for once again. A 20x optical zoom/lens whatever would also be nice.

The best they can do is shrink the notch, and inflate the price tag.
Score: 15 Votes (Like | Disagree)

It takes billions to develop an operating system, research and maintaining and distributing it.
Android is free to telcos, (adding their own layers of software), free to “manufactures”, and to anyone that feed Google with your info. Imagine how easy is to add a few features here and there, and for people like you saying, competition es gooood, they are ahead of Apple!!! So much for inflate the price tag!!!
Get yourself a Blackberry to see how was Android before copying every comma form Apple
Jayyyyzzzzzzuuuuuzzzzz

Apple can’t even get auto correct to work fluently. So please, spare me the apple sob story.
Score: 11 Votes (Like | Disagree)

contacos
It should be clear to everyone that the Notch looks like this partially on purpose. You can easily recognize an iPhone that way and if a lot of people have one thing, a lot of other people will want the same thing, even if it is subconsciously. Same with the AirPods looking like toothbrushes and coincidentally only available in WHITE. You immediately know what it is. Can’t say the same for Sony or whatever headphones in ones ears
Score: 11 Votes (Like | Disagree)
Read All Comments

Wednesday October 20, 2021 8:51 am PDT by Joe Rossignol
Bonhams today announced that it will be auctioning several rare prototype Apple devices on November 3, including an unreleased VideoPad. The VideoPad was intended to be a personal digital assistant (PDA) device similar to Apple's Newton MessagePad series, with Apple testing three versions of the device between 1993 and 1995, including the VideoPad 1, VideoPad 2, and VideoPad 3, according to...
Read Full Article • 41 comments

Thursday September 23, 2021 4:09 am PDT by Sami Fathi
New images offering us our first real-world look inside the new iPhone 13 have revealed a smaller Taptic Engine, a larger battery, and revamped components of the TrueDepth camera system. The iPhone 13 lineup will start arriving at customers on Friday, a week after pre-orders went live. While a more professional teardown of the device will be shared online in the coming days and weeks,...
Read Full Article • 69 comments