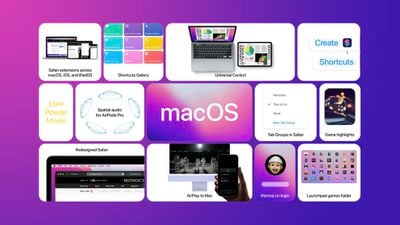 Public beta testers can download the macOS 12 Monterey update from the Software Update section of the System Preferences app after installing the proper profile from Apple's beta software website.

macOS Monterey introduces quite a few major updates for the macOS operating system. Universal Control, for example, lets a single mouse, trackpad, and keyboard be used across multiple Mac or iPad devices, and it's now possible to AirPlay directly to a Mac from an iPhone, ‌iPad‌, or even another Mac.

Safari has an updated tab bar and support for Tab Groups to keep tons of tabs organized, and FaceTime now features support for spatial audio, Portrait Mode (M1 Macs only) and Voice Isolation for cutting out background noise. A SharePlay ‌FaceTime‌ feature lets Apple TV users watch TV, listen to music, and share their screens with one another.

Shared With You, another new feature, keeps track of the music, links, podcasts, news, and photos that people are sent in Messages, highlighting it in the relevant apps. Notes has a new Quick Note feature for jotting down thoughts, and the Shortcuts app is now available on the Mac.

A dedicated Focus mode helps people stay on task by cutting out background distractions based on what's going on, and there's an updated Maps app with a whole slew of new features. With Live Text, Macs can now detect text in photos or provide details on animals, art, landmarks, plants, and more in images.

Mail Privacy Protection hides IP and prevents tracking through invisible pixels, and iCloud Private Relay keeps Safari browsing protected. There are many other new features in ‌macOS Monterey‌, with a complete overview available in our macOS Monterey roundup.

In the developer beta that corresponds to the second public beta, Apple changed the default design of the Safari tab bar following multiple usability complaints. There's now a dedicated address bar at the top of the Safari window, with tabs arranged below it, rather than an all-in-one integrated design. Those who preferred the original design can use the View menu to toggle off "Show Separate Tab Bar."

orbital~debris
"Kevin Lynch, who is well known at Apple for overseeing work on the Apple Watch and now Apple Car, is set to take on a role hand-delivering copies of macOS Public Betas to customers."
Score: 6 Votes (Like | Disagree)

JMacHack
Macrumors:
“Snow Leopard was the best OSX release! They added no new features and focused on bug fixes!”

Also Macrumors:
“Monterey is boring because it doesn’t have more new features!”
Score: 5 Votes (Like | Disagree)

In the developer beta that corresponds to the second public beta

This should be written as MacOS 12 beta 3 is now released to public beta testers. If there was a different build version it would be unique to a PB release, but Apple hasn't been doing that for awhile. It just avoids confusion.
Score: 3 Votes (Like | Disagree)

justperry
One of the few OS versions which is by a long shot underwhelming.
Been on OS X/macOS since 10.0b, this is until now my least favorite one.
Score: 2 Votes (Like | Disagree)

Why because you can't run legacy applications? Or is this Mac hardware specific?
[HEADING=2]https://www.computerworld.com/article/2983507/the-evolution-of-macos-and-mac-os-x.html#slide1[/HEADING]

No, just nothing really different from Big Sur.
And Big Sur wasn't that special either but still way ahead of Monterey....just mho.
Score: 2 Votes (Like | Disagree)
Read All Comments