The upcoming 2021 iPhone will be named "iPhone 13" with the naming scheme of "mini," "Pro," and "Pro Max" variants for the entire lineup, according to the Economic Daily News. 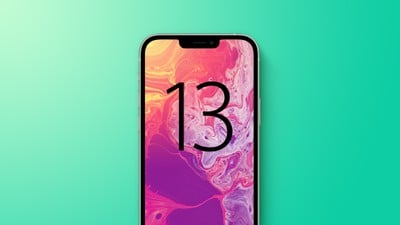 According to the report, citing sources and "supply chain" checks, Apple plans to market the upcoming iPhones as the "‌iPhone 13‌." Furthermore, the report says that Apple will stick with the "mini," "Pro," and "Pro Max" terms for the different variants, all set to launch in September.

From the report (machine translation):

According to the supply chain, this year’s new iPhone will return to the situation announced in September of the previous year. The foundry will start shipping in the third quarter, and the peak of the pull will fall in the fourth quarter. Apple will launch four new models, namely the 6.7-inch iPhone 13. Pro Max, 6.1-inch iPhone 13 Pro, and 5.4-inch and 6.1-inch models, also named iPhone 13.

The report follows recent discussion surrounding the name of the upcoming iPhones. A survey indicated that one out of five ‌iPhone‌ and iPad users are put off by the prospect of an "‌iPhone 13‌" due to triskaidekaphobia, a fear of the number thirteen. Instead, 38% of survey participants said they would like Apple to drop the corresponding number altogether and name each ‌iPhone‌ release moving forward based on the year, such as ‌iPhone‌ (2021).

Just 13% of ‌iPhone‌ and ‌iPad‌ users surveyed said they would like Apple to name the upcoming ‌iPhone‌ the "‌iPhone‌ 12S." Apple last used the "S" suffix in an ‌iPhone‌ name with the ‌iPhone‌ XS and ‌iPhone‌ XS Max in 2018, one year after the ‌iPhone‌ X. The "S" nomenclature is usually reserved for smaller incremental updates in annual ‌iPhone‌ releases. The ‌iPhone‌ 6S, for example, offered only minor improvements compared to the ‌iPhone‌ 6 a year earlier.

Based on what we know so far, the 2021 ‌iPhone‌ will feature some notable improvements, such as a more advanced display thanks to ProMotion 120Hz variable refresh rate and always-on capabilities. However, Apple may feel that the changes in the new iPhones warrant an entire number increase, rather than simply tacking on an "S" for the first time in three years.

iDento
I will buy 2 iPhone Minis to convince Apple to keep making them.
Score: 21 Votes (Like | Disagree)

djcerla
Remember when nobody would have bought a product named iPad because of feminine hygiene jokes?

The reason Apple always takes their time with stuff like this is because they actually work to make it great, in contrast to some other companies. You really should stop assuming that all under screen fingerprint sensors are as bad as the one in your current phone.
Score: 13 Votes (Like | Disagree)

Hence, it could be flipped around?

Monday July 12, 2021 10:54 am PDT by Juli Clover
Apple's 2021 iPhone models aren't expected to launch until September, but thanks to rumors, CAD drawings, and renderings, we already know what to expect. Dummy models are now circulating, and we got our hands on a set to give MacRumors readers an overview of the leaks that we've been seeing for months now. Subscribe to the MacRumors YouTube channel for more videos. We have dummy models of...
Read Full Article • 152 comments

Friday July 9, 2021 3:19 am PDT by Tim Hardwick
Smartphone accessory makers are already busy producing iPhone 13 cases based on chassis models that supposedly give them advance knowledge of how Apple's upcoming flagship devices will be sized, and one brand has taken the unusual decision to publicly share the models they're working off on social media. Well-known Chinese case maker Benks today posted on Weibo images of the models on which...
Read Full Article • 44 comments

Monday July 5, 2021 10:19 pm PDT by Tim Hardwick
Taiwanese Apple supplier Pegatron will remain a major assembler of smaller iPhones and will share orders for this year's forthcoming iPhone 13 mini with Foxconn, claims a new report from DigiTimes. Pegatron has obtained orders for the upcoming 5.4-inch iPhone model, as well as a portion of orders for another upcoming iPhone model that will feature a 6.1-inch display, according to market...
Read Full Article • 94 comments