Users appear to be underwhelmed by Apple's upcoming iOS 15 and iPadOS 15 updates, according to the findings of a new survey by SellCell. 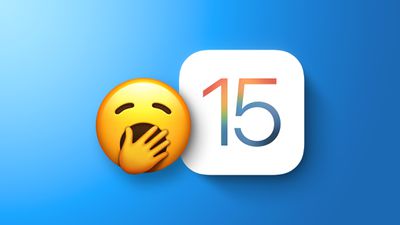 The survey asked 3,000 iPhone and iPad users, evenly split between men and women, aged 18 or over in the United States, what they thought of ‌iOS 15‌, ‌iPadOS 15‌, and the naming of the upcoming iPhone 13 lineup.

Over 50 percent of all of the survey's respondents said that the ‌iOS 15‌ and ‌iPadOS 15‌ updates are only "slightly" or "not at all" exciting. 28.1 percent rated the updates "somewhat" exciting, but as few as 19.3 percent are "extremely" or "very" excited about them.

Very few respondents were enamored with many of ‌iOS 15‌ and ‌iPadOS 15‌'s new features. Less than one percent of respondents thought that iMessage's "Shared with You" feature, Health app upgrades including fall-risk metrics and data sharing, and improvements to Apple Maps with more transit details and AR walking directions were the best new features. Likewise, FaceTime app improvements with Spatial Audio, screen sharing, grid view, and portrait mode, the redesigned notifications system, and Focus statuses only attracted around five percent of respondents.

Beyond the ‌iOS 15‌ and ‌iPadOS 15‌ updates, the survey also investigated triskaidekaphobia, a superstitious fear of the number 13, around the naming of the upcoming ‌iPhone 13‌. As many as one in five ‌iPhone‌ and ‌iPad‌ users said that they would be actively put off by the "‌iPhone 13‌" moniker.

Respondents were also asked how they thought Apple should name its upcoming series of ‌iPhone‌ models. Interestingly, most responses indicated that the devices should not be called the "‌iPhone 13‌." 38 percent said that Apple should call its next smartphone series simply "‌iPhone‌ (2021)," 26 percent thought that the "‌iPhone 13‌" was the best name, and only 13 percent said that they would like to see the devices called the "‌iPhone‌ 12S."

DJC631
Neither update looked very exciting, and iPadOS was downright a disappointment for anyone hoping to really use an iPad as their main machine.
Score: 84 Votes (Like | Disagree)

cmaier
Things like “ipad widgets on desktop” shouldn’t even count. It was almost like apple purposely didn’t given ipad certain features last year just so they’d have something to provide this year.
Score: 67 Votes (Like | Disagree)

darcyf
Everyone: why can’t I add multiple destinations to a route in maps??

Too early to make any judgements. Apple introduced well over 500+ changes this year come on now. Just look at the new weather and map App!

and 490 of them are minor and make no change to your daily life
Score: 45 Votes (Like | Disagree)

It's hardly a landslide.
Score: 28 Votes (Like | Disagree)
Read All Comments