Apple will launch an iPad next year featuring a processor based on chipmaking partner TSMC's next-generation 3-nanometer process, according to a new report today from Nikkei Asia. 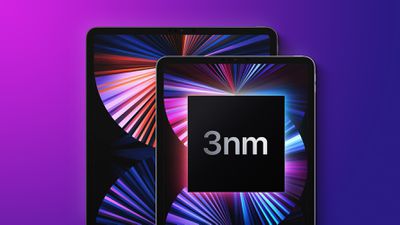 Apple and Intel are testing their chip designs with TSMC's 3-nanometer production technology, according to several sources briefed on the matter, with commercial output of such chips expected to start in the second half of next year.

Apple's iPad will likely be the first devices powered by processors made using 3-nm technology, sources said. The next generation of iPhones, which are to roll out next year, are expected to make use of the intermediate 4-nm tech for scheduling reasons.

According to TSMC, 3nm technology can increase processing performance by 10% to 15% compared to 5nm tech, while reducing power consumption by 25% to 30%.

If today's report is accurate, this would be the second time in recent years that Apple has debuted new chip technology in an ‌iPad‌ before using it in its flagship smartphones.

Apple is using its latest 5-nanometer chip technology in the current iPad Air, which launched in September, with the tablet equipped with a 6-core A14 Bionic chip. Apple doesn't often use new chip technology in an ‌iPad‌ before it debuts in an iPhone, but that is what happened in 2020 due to the delayed release of the iPhone 12 models. The ‌iPhone 12‌ also features the same A14 Bionic chip.

The latest iPad Pro models, which launched in April, feature the powerful M1 chip, which first debuted in Apple Silicon Macs last year. The ‌M1‌ chip is based on the same 5nm architecture as the ‌iPhone 12‌ series and ‌iPad Air‌.

Whether Apple debuts the next-gen 3nm chip technology in an ‌iPad Air‌ or ‌iPad Pro‌ is unclear, although the timing looks likely to favor the ‌iPad Pro‌. Apple typically updates the ‌iPad Pro‌ every 12 to 18 months, which could see a next-generation model appear in the second half of 2022.

That would put the ‌iPad Pro‌ close to the timeframe reported for the commercial use of 3nm, whereas production on a next-generation ‌iPad Air‌ with an OLED display is rumored to start in the fourth quarter of this year, with a launch to happen in early 2022.

According to Nikkei's sources, the chip volume planned for Intel is more than that for Apple's ‌iPad‌ using the 3nm process. Intel is said to be relying heavily on TSMC until it can get its own in-house technology back on track. Intel has delayed the introduction of its own 7nm technology to around 2023, while the release of its latest 10nm Xeon processors has been pushed forward into the second quarter of next year.

As for Apple's iPhone 13, expected in September, Apple will use a 5nm+ A15 chip. The 5nm+ process, referred to by TSMC as N5P, is the "performance-enhanced version" of its 5nm process that will deliver additional power efficiency and performance improvements. Today's report also backs a previous one claiming that the A16 chip in 2022 iPhones will be manufactured based on TSMC's future 4nm process.

NastyMatt
Great news.. the iPad has always been hampered by it's cpu power. /s
Score: 42 Votes (Like | Disagree)

ooans
Yep. As of today the M1 iPad's are pretty much obsolete!
Score: 20 Votes (Like | Disagree)

it doesn't matter what they do to the ipad, until they put mac os on it, it's a toy

I am a product designer for a big tech company that’s the worldwide leader in its market, my job involves research, analysis, documentation, design, prototyping, pitching and presentations to stakeholders, facilitation of creative workshops and design thinking activities. Since 2018 I don’t own a personal computer, only the computer my company gives us and an iPad Pro, and in 2021 I am able to do 80% of what I described with the iPad itself; the bigger limitation is not software, as a lot of people that don’t know what they are talking about and/or don’t even use an iPad for work or at all keep saying, but partially my choice of going for the smaller format for portability, and mostly the fact that my company gives me a MB Pro, peripherals and a 30” inches screen so I may very well use them. Now that iPads support external displays and touchpad, and Safari server desktop pages, I could very well do everything with my iPad if I wanted do, thanks to web based design/prototyping tools as Figma. And as I described above my job involves a lot of very different tasks.

What’s your job? What did you try to do and you weren’t able to that made you consider iPads ”toys”?
Score: 18 Votes (Like | Disagree)

JPack
For people struggling to understand why this makes complete sense, the answer is - you always want the highest density technology for the products with the highest margin.

iPhone doesn't allow the consumer to fork over $100 for an extra CPU or GPU core.

iPad and MacBook based on M2 or M3 will. When Apple can charge a few hundred dollars extra for more cores, they'll want to apply the latest technology in order to maximize profit. Intel and AMD follow this strategy.
Score: 13 Votes (Like | Disagree)

ian87w
Any power efficiency advantage would be cancelled by thinner design and smaller battery. Because Apple...
Score: 12 Votes (Like | Disagree)

Yep. As of today the M1 iPad's are pretty much obsolete!

Because a better model is rumored to launch next year? By this logic, which product is *not* obsolete?

A lack of cpu power is surely not what makes any of the iPad Pros from 2018 on obsolete.
Score: 10 Votes (Like | Disagree)
Read All Comments

Tuesday August 10, 2021 8:47 am PDT by Sami Fathi
The 2022 iPhones and Macs may feature chips built on the 3nm process, as Apple's leading chip supplier, TSMC, is planning to begin mass production for 3nm chips destined for Apple in the second half of next year, according to a preview of an upcoming report by DigiTimes. The paywalled preview of the full report, which will be published tomorrow, reads: TSMC is on track to move its 3nm...
Read Full Article • 77 comments

Thursday August 4, 2022 6:05 am PDT by Sami Fathi
With August upon us, the countdown is officially on. We're just weeks away from when we're expecting Apple to announce the iPhone 14 lineup. Rumors of the next iPhone start early in the year, and as a result, some details about the upcoming device sometimes get lost in the crowd. Exclusive MacRumors iPhone 14 Pro renders by graphic designer Ian Zelbo To help MacRumors readers, we've created a ...
Read Full Article • 96 comments

Friday August 5, 2022 2:47 am PDT by Sami Fathi
You've probably experienced visiting a website like Reddit or LinkedIn on your iPhone only to be greeted with an annoying, almost full-screen pop-up urging you to view the content in their app instead of on the website. It's a common practice for websites that have accompanying iOS apps to push users to open (if they already have the app installed) or download their app from the App Store to ...
Read Full Article • 107 comments