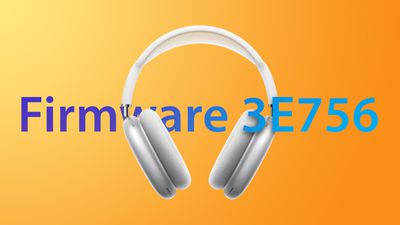 The new 3E756 firmware replaces the 3C39 firmware that was released to ‌AirPods Max‌ owners in March.

Apple does not provide details on what's included in new firmware updates, so we don't know what bug fixes or improvements the new firmware might offer. There may be improvements to battery life, or updated support for Spatial Audio, a feature that debuted for Apple Music yesterday.

There's no standard way to upgrade firmware on AirPods, AirPods Pro, or ‌AirPods Max‌, but connecting the ‌AirPods Max‌ to an iPhone or an iPad while connected to a power source may force the update.

In the past, updates for the ‌AirPods Pro‌ and AirPods have included performance improvements, bug fixes, and feature tweaks. The prior update, for example, addressed a Smart Case battery drain issue.

If we find notable changes after installing the firmware updates, we'll update this article.

I was hoping for a 2nd improved edition of this product to replace my SONY WH-1000xm3,
but I fear the AirPod Max will follow the original HomePod into obsolescense

You can't choose to update or not, there's never any real change log. I'm typically an early updater anyways so it doesn't matter as much for me, but I can't think of a good reason. It's not like they are letting out trade secrets in the update logs
Score: 15 Votes (Like | Disagree)

I am sure, nay, almost certain, this is to fix and tamper down the criticism that these headphones can't play lossless audio files...

Now when you put them on, instead of the familiar connection dong, Siri will sternly remind users that bluetooth is by nature a lossy transmission method.
Score: 11 Votes (Like | Disagree)

It can't support lossless audio unless Apple invents a new radio standard. Sony's LDAC is ALMOST cd quality. Or Apple places a stronger transmitter to allow WiFi bandwidth for audio. Or Apple places memory chips in the headset to buffer a stream.

If AirPods Max were suddenly going to gain even near-lossless audio via a firmware update, I'm sure Apple would have been hyping that all over the place on Monday. Instead, they only mentioned an update for the HomePod mini (and presumably the full-sized HomePod, but of course they're not talking about that anymore).

I'm hoping that Apple is at least working on something like AAC-SLS, which is similar to LDAC without being proprietary to Sony (which is why Apple will almost certainly never adopt LDAC directly). AAC-SLS would provide scalable near-lossless quality, which means that much like LDAC it could ramp up to almost 1Mbps at short ranges, while scaling down to the more traditional 256kbps when the signal isn't strong enough to maintain a higher bitrate.

That said, Apple clearly wants to be as precise as possible when describing its Lossless Audio. Consider that it doesn't officially support Lossless Audio on the AirPods Max over a wired connection either. However, that doesn't mean you're getting 256kbps AAC when using the 3.5mm to Lightning cable. Rather, you're getting the exact analog audio stream that comes out of the headphone jack or DAC — it's just that it has to go through another ADC level before it's delivered to the drivers on the APM. That technically changes the stream, potentially adding artifacts, but it doesn't compress the audio or lower the bitrate — it simply converts it back to digital.

What's more of a mystery, mind you, is why the Lightning port on the APM doesn't support a straight digital stream from the iPhone's Lightning port.

I believe Apple will release a software update to AirPlay that will allow it to use both WiFI and Bluetooth together when paired with AirPods Max/AirPods Pro.

Unfortunately, since the AirPods Max don't have any Wi-Fi hardware, that would require an entirely new product. The current AirPods Max will likely never be able to support truly Lossless Audio — at least not over a wireless connection.

In the case of the HomePod and HomePod mini, Apple is updating them to pass ALAC directly over AirPlay 2. Right now, they use the 256kbps AAC codec to save bandwidth, but AirPlay 2 is technically capable of 24-bit/44.1kHz audio. They'll never provide Hi-Res Lossless, of course, but I seriously doubt that anybody would ever be able to hear that even on the original full-sized HomePod, much less a HomePod mini (which is the only speaker that Apple cares about right now anyway). In fact, I'm skeptical that even standard lossless audio is discernible from 256kbps on a HomePod mini, but it will be a nice bonus for those who want to think they can hear a difference ?
Score: 7 Votes (Like | Disagree)

Seems easy enough to understand: They have software improvements that they want to push out to all users, not just those who notice an update is available and then take the time to install it. If it can be handled on a fully-automated basis, then why add the human element to the equation? I find this nearly seductive - a product that automatically improves over time.

Why shouldn’t firmware auto-update? It’s relatively simple device-specific software. Updates will be either bug fixes, power-efficiency tweaks, more-efficient/higher-quality codec algorithms, improved wireless communication profiles, or add compatibility with features delivered by new versions of the serving device’s OS. Is there something on this list a person wouldn’t want?

Unlike a desktop computing environment there’s no need to stay on an older OS in order to support apps that are incompatible with the new OS, there’s nearly never a change to operating control functions (adapt to new/modified UI elements)…

Change logs… this isn’t an open system OS where users are actively engaged in debugging. If you mean the typical Apple-style update notice, “Fixed an issue that could impact connectivity to devices using certain Bluetooth chip sets” Just how many users would find that at all helpful?

Altogether, on what basis would any individual choose to not upgrade? Would it be a properly informed decision, or just an emotional response to change of any sort? Bottom line for me is, if you distrust the company’s ability to improve the product through software, or distrust the company’s motives for issuing new software, then why buy the product in the first place?

This is all a lot, but my response is shorter.

1. I don’t mind auto-update but it wouldn’t hurt to have the ability to force the update to happen.

2. I would definitely like notes that tell me what changed, and I’d imagine many people would. When any of my devices update, I would like to know what has changed.
Score: 6 Votes (Like | Disagree)
Read All Comments