Apple today announced that TestFlight, which allows developers to public test their apps before launch, will be coming to the Mac as part of wider tools meant to improve app development. 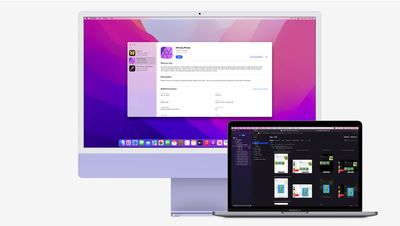 TestFlight for the Mac is part of a wider set of tools for developers, including Xcode Cloud, which offers "continuous integration and delivery cloud service designed specifically for Apple developers." With the new service, developers in teams can now easily test, develop, and deploy apps more efficiently. Xcode Cloud also allows developers to build apps in the cloud, freeing up local space on the Mac.

Xcode Cloud is a new continuous integration and delivery cloud service designed specifically for Apple developers. Built into Xcode 13, Xcode Cloud offers a fast and simple way for developers and teams of all sizes to build, test, and deliver high-quality apps even more efficiently. Xcode Cloud can automatically build apps in the cloud to free up developers’ Macs for other tasks. Parallel testing in the cloud means developers can test on a simulated version of every current Apple device, then easily deploy a build of the app for internal testing, or deliver to external beta testers through TestFlight for instant feedback.

Apple also announced changes coming to augmented reality, including Object Capture, which offers an easy way to capture real-world objects and create photo-realistic models with the iPhone, iPad, and DSLR cameras. Swift Playgrounds 4, which allows users to build and distribute apps to the App Store from the ‌iPad‌, was also announced.

More information about these new developer features can be found in Apple's press release, and other announcements from WWDC can be found using our roundup.

dgdosen
I've watched the first 3 minutes and 57 seconds of the Platform State of the Union. With respect to Xcode Cloud, Apple is saying that I need to code, test, integrate and deliver all through Xcode.

First off - they say, right off the bat, this is only works for "The Apple Platform". While a org like BearApp might use this, because they're tightly coupled to the Apple platform, orgs like 1Password, Instagram, Evernote, Paper or any other org that has sights on multiple platforms (including the web?) will be introducing more complexity into their CI/CD process. I'm not saying it won't work, but it's kind of trying to sherlock other providers of these services - and those are providers that already work well on other platforms.

Second, they're saying this all needs to be done in Xcode, because context switching is a killer. Now if I'm slinging code, I want my code window easily accessible. And a test window, maybe a git window, maybe a window to my CI process, maybe a database view, maybe some streaming logs, maybe other windows. Now I'll agree it's context switching to 'take my eyes off my code' - but what's worse? Command tabbing through already open windows, or opening up some modal view in XCode and thus covering up my code.

Context switching is in the eye of the beholder.

I only have an hour and 9 minutes to go.

4487549
Or continue selling / testing / trialing your apps outside the App Store where we can still install them on macOS (thank god).
Score: 1 Votes (Like | Disagree)

Xcode Cloud looks like Apple's way of saying - "We missed the boat on everything GitHub/GitLab, so please use our platform specific answer."

But does it mean that I don’t have to deal with local build machines running gitlab agents and monitoring git commits?
I’m actually quite curious about what the service offers to be honest
Score: 1 Votes (Like | Disagree)
Read All Comments