Apple 'homeOS' Mentioned in Job Listing Ahead of WWDC

An Apple job listing has mentioned "homeOS," an otherwise never-before heard of Apple operating system, ahead of WWDC next week. 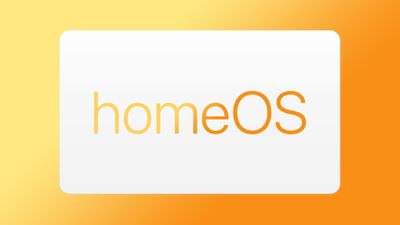 Spotted by developer Javier Lacort, the Apple job listing for a Senior iOS Engineer in Apple Music explicitly mentions "homeOS" on two occasions, alongside Apple's other operating systems including iOS, watchOS, and tvOS.

You'll get to work with system engineers across Apple, learning the inner-workings of iOS, watchOS, tvOS and homeOS, and optimizing your code for performance in ways only Apple can. Come join our team and make a real difference for music lovers worldwide.

The Apple Music Frameworks team owns the technology stack that enables the system-integrated Apple Music experience on all of our mobile platforms: iOS, watchOS, and homeOS.

Interestingly, the job listing mentions homeOS as a "mobile platform," seemingly highlighting it as more akin to iOS and watchOS than systems like macOS and tvOS, but it is not clear why that would be the case.

The operating system could simply be a rebranding of Apple's current smart home software, in much the same way iOS for iPad was rebranded iPadOS and OS X was changed to macOS, or potentially an entirely new OS.

Earlier this year, Bloomberg's Mark Gurman commented that Apple still lacks a "unifying strategy" for the smart home market. It is possible that homeOS could be software designed to spearhead a more centralized smart home strategy, perhaps unifying the HomePod's audioOS and the Apple TV's tvOS. Apple is rumored to be developing a combined Apple TV and HomePod device and a HomePod with a screen. For now, what homeOS will precisely entail remains purely speculative.

Apple's homeOS could feasibly debut as soon as next week at WWDC, where the company is expected to unveil major updates to its various operating systems.

Update: Apple has now removed "homeOS" from the job listing and replaced it with ‌HomePod‌ and tvOS. "You’ll get to work with system engineers across Apple, learning the inner workings of iOS, watchOS, tvOS and ‌HomePod‌, and optimizing your code for performance in ways only Apple can," reads the replacement text.

Apple_Robert
I bet it is a rebranding of HomeKit.
Score: 28 Votes (Like | Disagree)

MrLoL
My guess would be that's the name of the OS running on that rumored "HomePod with a screen" product
Score: 25 Votes (Like | Disagree)

Can we drop the lowercases already.

We already have iPadOS, so why not MacOS and HomeOS?

To me the leading lowercase character looks better aesthetically when the words are combined with "OS" for some reason.
Score: 14 Votes (Like | Disagree)

My initial thought was a rebranded tvOS, but it given the ad mentions that as well, presumably it's separate? A specific HomePod OS?

Could be that they're merging HomePod's audioOS and Apple TV's tvOS into a new homeOS.
Score: 7 Votes (Like | Disagree)

Apple Knowledge Navigator
They should rename iOS to iPhoneOS while they're at it. Would make sense seeing as iPad now has its own OS.
Score: 7 Votes (Like | Disagree)
Read All Comments