Spotify executive Horacio Gutierrez has explained in a wide-reaching interview with The Verge why the company believes Apple is a "ruthless bully" and what it would like to see change. 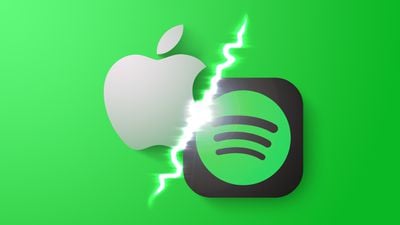 Last month, Gutierrez penned an op-ed in the Wall Street Journal that chastised Apple and some of its business practices. Now, Spotify's head of global affairs and chief legal officer has expanded on the logic behind the company's antitrust dispute with Apple.

Gutierrez's main justification underpinning the argument that Apple's App Store payment system is not a necessary part of its business is that it "wasn't part of the ‌App Store‌ in the beginning."

Concretely, when it comes to the App Store, it is very clear that the choice to tie Apple's proprietary payment system to the App Store was an arbitrary choice. It wasn't part of the App Store in the beginning, just as the 30 percent Apple tax wasn't a requirement when we made it into the App Store. They bolted that on later in the process and in doing that, they created this environment in which competing apps really have to contend with Apple's own music streaming service as well as other competing products on what's not really a level playing field.

Apple's 30 percent commission on ‌App Store‌ sales and in-app purchases was also raised as an "arbitrary rate," and Gutierrez explained that it is not merely a reduction in commission that Spotify is looking to achieve.

The issue is not whether the rate is 30 or 15 or 10 percent, the issue is that the rate is arbitrary and they get to set it unilaterally because they've insulated themselves from competition. What should happen is Apple should be able to charge 30, or 50 percent, if they can convince users in a market economy that the value that they provide justifies the 30 percent, or the 15 percent, or the 50 percent. What we're saying is they actually prevent competitors from coming in and offering alternative payment systems, and therefore there is no market.

Gutierrez explained that Spotify would like to see Apple return to its previous approach with the ‌App Store‌ and loosen its grip on rules and penalties.

We want Apple to go back to the situation that existed at the time when we joined the App Store. We want them to undo the tying of their proprietary payment system to the App Store and all of the other anti-steering provisions, which is a fancy way of saying punishments and penalties that they've created for those people who do not want to use their proprietary payment system. Basically, restore the situation to the way it was before their anti-competitive abuse started.

Specifically, Gutierrez said that the market should be able to choose from a selection of payment systems on the ‌App Store‌, and that Apple should be able to contend with other payment technology in a more competitive environment.

There is a monopoly on payment systems, which is why they can afford to impose the 30 percent. Let the market decide. Enable PayPal and Mastercard and other new payment systems to come in and then let users decide, vote with their dollars on whether Apple's technology is so superior when it comes to payment and all these other things that they’re willing to pay 30 percent more.

Addressing criticisms that Apple's rules and fees are valid given it built and maintains the ‌App Store‌ and the devices apps run on, Gutierrez explained that Spotify believes this should not be a reason to allow anticompetitive conduct.

There is no reason why a platform provider that's supposed to be a neutral platform provider like Apple would be allowed to create conditions that would force companies like ours to have to make that choice. They say, "Well, but we built it." Yeah, you built it. But when you built it it wasn't like that. It was significantly built on the backs of the work of many app developers that came to the App Store that you touted as the reason why people should come and use your platform. And whether you built it or not, it really doesn't matter from an antitrust perspective. The railroad companies built the railroads, the steel companies built the steel mills, and the telephone companies built the telephone lines… The biggest cases in the history of antitrust enforcement in the U.S. had to do with companies that had built that infrastructure and then used the power that that control gave them to hurt competitors.

See the full transcript of The Verge's interview with Gutierrez for more information.

_Spinn_
I absolutely do not want other payment options in apps. I don’t want to give my payment info to every app under the sun and risk potential data leaks where my credit card number gets stolen. I trust Apple to keep my payment info secure.
Score: 30 Votes (Like | Disagree)

WaffleBoi_15
Not surprising the company known for not paying artists doesn’t wanna pay the Apple tax either. Greedy bastards.
Score: 24 Votes (Like | Disagree)

dscottbuch
It seems that everyone wants to skip over the fact that the underlying premise is false. Apple does NOT have a monopoly in any pre-apple definition of the term. There are many alternatives, Android being the most obvious and even larger market share than iOS/Apple. What Apple has is the most lucrative market for app providers, that's all. While those arguing can try and put lipstick on the pig with mis-direction and appeals to the emotion of the underdog (although how multi million, or billion, $ companies can be underdogs I'm not sure) the bottom line is this is all, and only about profits. Every app maker on iOS makes good to very good incremental profits by being on iOS, else they wouldn't be there. They don't need to be on iOS to exist as there are competitors to iOS App Store, in which these same companies make profits.

The argument that Apple has a price advantage is also unprovable and likely specious. App Store charges 30% for use of all the facilities the App Store provide, not just the payment system. I seriously doubt that any one of these companies could put together the marketing, tech, etc. for an App Store for anything approaching what they pay Apple.

Also, where is it decreed that iOS is a 'neutral' platform like the railways. Railways used public lands and provided very little added value (read technology) beyond the rails themselves (and some safety and use rules). iOS is an Apple platform which has been opened up under very clear rules promulgated by its owner, Apple.

One again, Spotify, Fortnight/Epic, ... don't have to be on iOS. There are literally billions of other devices out there on which to build a business. They fact that they have chosen, note - chosen, to be in iOS is because they make $ there, a lot of $. This is, once again, only and all about more $ ( on both sides by the way but Apple if very forthright on that. Tim Cook said it, we need to monetize our IP).
Score: 22 Votes (Like | Disagree)

Hayden_
Someone is mad about lossless audio :oops:
Score: 19 Votes (Like | Disagree)

The biggest cases in the history of antitrust enforcement in the U.S. had to do with companies that had built that infrastructure and then used the power that that control gave them to hurt competitors.

Now hopefully with the money saved, they can use it to hire more developers. You hear that, Spotify? I want Spotify Connect to work on my Homepod! :D
Score: 14 Votes (Like | Disagree)

I absolutely do not want other payment options in apps. I don’t want to give my payment info to every app under the sun and risk potential data leaks where my credit card number gets stolen. I trust Apple to keep my payment info secure.

I do want alternatives. Why can’t we have choices?
Score: 14 Votes (Like | Disagree)
Read All Comments