Apple's unreleased Beats Studio Buds were today spotted out in the wild in a set of Instagram photos shared by LeBron James. James appears to be wearing the Beats Studio Buds in white, based on the shape and design of the earbuds in his ears. 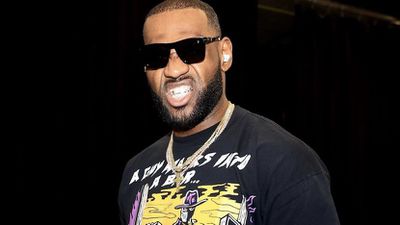 It's difficult to get a good look at the Beats Studio Buds worn by James, but we've already seen several closer views of the upcoming earbuds. The wire-free in-ear Beats-branded earbuds were first spotted by MacRumors in the tvOS 14.6 and iOS 14.6 betas earlier this month.

The Beats Studio Buds are easy to identify at a glance because they're unlike any prior Beats headphones that Apple has released to date, as there is no ear wrap as with the Powerbeats Pro. Compared to other Beats-branded headphones, the Beats Studio Buds are tiny in design and look similar to in-ear earbuds from companies like Samsung and Google, but with a distinctly Beats-like look and feel.

Apple plans to offer the Beats Studio Buds in red, black, and white, with a matching oval-shaped charging case available with the headphones. As with the ‌Powerbeats Pro‌, the Beats Studio Pro feature silicone ear tips that fit into the ears.

In addition to spotting the Beats Studio Buds in iOS 14.6, we've also seen them in FCC filings and earlier this week, images of the casing leaked, giving us a clearer picture of the design.

Beats Studio Buds are particularly interesting in light of AirPods Pro 2 rumors. Apple's AirPods Pro 2 could feature a similar design, with rumors suggesting the updated AirPods will have a rounded, compact design that's stemless, a description that sounds a lot like the new Beats.

There's no word yet on when the Beats Studio Buds might be launching, but since they've already received FCC approval, we could be seeing them in the near future.

Black Belt
Who cares what that fool is wearing
Score: 119 Votes (Like | Disagree)

iDento
I was planning to get one of these, not anymore. Not that there’s anything wrong with a product that isn’t announced yet, I just don't want to remember LeBron every time I use it.
Score: 59 Votes (Like | Disagree)

For real nobody cares what James is or isn’t doing.
Score: 57 Votes (Like | Disagree)

BGPL
I would say I'm not impressed with Lebron anymore, but I don't think I'm the demographic that Apple is pursuing.
Score: 52 Votes (Like | Disagree)

Jony Ive and Co.
Apple probably gave him those for free and asked him to wear them in public so we will be able to see these "leaks". Just building up hype with a star.
Score: 30 Votes (Like | Disagree)

Umm…you clicked on the article when you could have easily kept scrolling. So obviously you care
Score: 29 Votes (Like | Disagree)
Read All Comments