Last week, Bloomberg reported that Apple is working on a high-end version of the Mac mini with additional ports and featuring the same Apple silicon chip expected to debut in the upcoming redesigned MacBook Pro. Now, new renders from Apple leaker Jon Prosser have potentially given us our first look at this upcoming Mac. 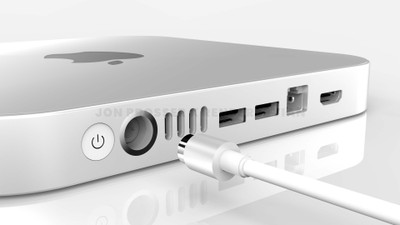 According to renders made by Ian Zelbo in collaboration with Prosser, and shared in a new YouTube video from Front Page Tech, the new Mac mini will retain a mostly similar design to the existing ‌Mac mini‌ but be smaller in overall size.


According to Prosser, the new high-end ‌Mac mini‌ will feature the same ports currently available on the Intel-based ‌Mac mini‌, which includes four Thunderbolt, two USB-A, Ethernet, and HDMI. Another change reportedly coming to the new ‌Mac mini‌ is a "plexiglass-like" top, which will sit above the aluminum enclosure.

Proser says he has "heard" that Apple is testing two-tone color options for the ‌Mac mini‌, similar to the newly released 24-inch iMac. Finally, Prosser says that the new ‌Mac mini‌ will feature the same magnetic power port that debuted in the 24-inch ‌iMac‌.

Apple updated the ‌Mac mini‌ with the M1 Apple silicon chip in November, keeping in its lineup Mac minis equipped with Intel processors. Bloomberg has indicated Apple could scrap its plans to release this new high-end ‌Mac mini‌ but notes that regardless, it will eventually replace the current Intel models with ones featuring Apple silicon chips.

no internal heat from power brick...so even better for cooling
Score: 65 Votes (Like | Disagree)

Stephen.R
Whoever created that render has never used a computer with anything plugged in, have they? Look how close the ports are.
Score: 58 Votes (Like | Disagree)

zorinlynx
Why the crap does the Mac Mini need to change to using an external power brick? One of the nice things about the Mac Mini is its lack of such a brick.

The first iteration of the Mac Mini had one, then moved away from that. It feels like we're sliding backwards?
Score: 46 Votes (Like | Disagree)

God of Biscuits
If it's got the same power brick as the iMac, why would it have an ethernet port *ON* the machine itself?
Score: 44 Votes (Like | Disagree)

ignatius345
Now they just need to release an affordable monitor to go with it!
Score: 40 Votes (Like | Disagree)
Read All Comments