Apple is working on a high-end version of the Mac mini, featuring a more powerful Apple silicon chip and extra ports, according to Bloomberg's Mark Gurman. 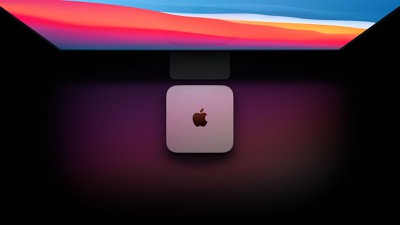 In a wide-reaching report, Gurman explained that Apple is developing a more powerful version of the ‌Mac mini‌, positioned as a high-end version of the current M1 model. The new ‌Mac mini‌ is expected to use the same chip as the next-generation MacBook Pro.

The next-generation MacBook Pro models are expected to feature an improved version of the ‌M1‌ chip with a 10-core CPU, containing eight high-performance cores and two energy-efficient cores, and 16-core or 32-core GPU options, meaning this is also what we can expect from the new ‌Mac mini‌. Gurman said that this Apple silicon chip will also support up to 64GB of memory, a significant increase compared to the current maximum of 16GB.

The high-end ‌Mac mini‌ is also expected to feature four Thunderbolt ports on its rear, rather than the two that are available on the rear of the current ‌Mac mini‌ with an ‌M1‌ chip, which is also a change supported by the next-generation Apple silicon chip.

Apple has also been working on a more powerful version of the ‌Mac mini‌ (code name J374) with the same chip as the next MacBook Pro. It's expected to have four ports versus the pair available on the current low-end version and to sit above the current entry-level ‌M1‌ Mac Mini. Apple could delay or cancel the new mini's launch - as it has in the past - but eventually the company will likely replace the Intel-equipped version it now sells.

When Apple introduced the ‌M1‌ ‌Mac mini‌ last year, it retained the Intel Mac minis with two additional ports in the product lineup as a high-end option. Apple did the same with the MacBook Pro and iMac, where the ‌M1‌ option replaced the entry-level version of the machine, and kept the high-end Intel models with more ports on sale.

bgalakazam
I am content with the M1 I just ordered. If you play the "next model is going to be better" game you will never buy anything from Apple...
Score: 24 Votes (Like | Disagree)

jerryk
If the price is right I will pick one of these up! It has been a while since I had a desktop Mac (2009 mini) and I kind of miss it.
Score: 23 Votes (Like | Disagree)

I am content with the M1 I just ordered. If you play the "next model is going to be better" game you will never buy anything from Apple...

It's fine that you're content, but people who need more would be smarter to wait a few months than to spend money on a model that is insufficient for their needs.
Score: 17 Votes (Like | Disagree)

Orange Bat
To those who are curious Apple added 10Gb ethernet to the Mini about a month ago.
Score: 14 Votes (Like | Disagree)

BGPL
Yes! This will be my new rig, no more iMacs. Please offer 10Gb Ethernet!
Score: 12 Votes (Like | Disagree)
Read All Comments

Tuesday April 20, 2021 12:54 pm PDT by Juli Clover
In addition to overhauling the iMac lineup with new M1 iMac options, Apple today quietly added a new feature to the Mac mini. Mac mini buyers can now opt to add a 10 Gigabit Ethernet port to the device for a $100 add-on. When the Mac mini launched, there was a Gigabit Ethernet option, but no upgrade to 10 Gigabit available. There was, however, a sign that 10 Gigabit Ethernet was coming. Ma...
Read Full Article • 67 comments

Saturday May 29, 2021 6:00 am PDT by MacRumors Staff
WWDC is quickly approaching, and that means rumors are starting to ramp up including the possibility that we might see the long-rumored MacBook Pro redesign at the keynote. This week also saw rumors about future updates to the AirPods and AirPods Pro, as well as a redesigned Mac mini. In other news, Apple has released iOS 14.6 with new features like Apple Card Family and podcast...
Read Full Article • 20 comments

Monday February 8, 2021 7:25 am PST by Mitchel Broussard
B&H Photo is discounting Apple's newest Mac mini (512GB) to $829.00, down from $899.00. This is the lowest price that we've tracked to date for this model of the Mac mini, which was refreshed in late 2020 with the new M1 chip. Note: MacRumors is an affiliate partner with B&H Photo. When you click a link and make a purchase, we may receive a small payment, which helps us keep the site running. ...
Read Full Article • 67 comments