A questionable report is today claiming that Apple's next-generation MacBook Pro models will feature an "M1X" chip and remove the "MacBook Pro" logo from below the display. 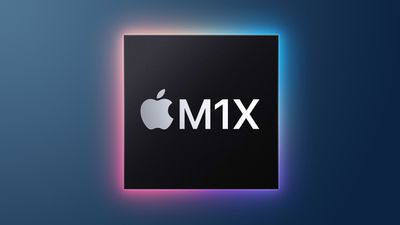 The report from 9to5Mac says that "a source with a decent track record," iOS developer Dylandkt made the claims. According to Dylandkt, "Apple's planned name for the MacBook Pro chips" is the "M1X."

The M1X is an extension of the M1 that will contain more thunderbolt channels, cpu cores, gpu cores, multiple external monitor support, and greater power draw. These devices will both feature a 1080p webcam, SD card reader, three thunderbolt usb c ports, an updated MagSafe port, and an HDMI port.

9to5Mac suggested that this rumor from its source aligned with reliable Bloomberg journalist Mark Gurman's recent report on the new MacBook Pro models, but this does not seem to be the case at all upon closer examination.

Earlier this week, Gurman explained that the upcoming 14- and 16-inch MacBook Pro models will feature a new Apple silicon chip including a 10-core CPU with eight high-performance cores and two energy-efficient cores, 16-core or 32-core GPU options, support for up to 64GB of memory, and support for additional Thunderbolt ports.

Gurman did not comment about how the MacBook Pro's new chip would be branded, but given what he went on to explain in the report, it seems highly unlikely that it would be an "M1X."

The crucial detail Gurman explained was that the 13.3-inch MacBook Pro and a high-end version of the MacBook Air are also due to get a new Apple silicon chip. This chip "will include the same number of computing cores as the M1 but run faster. It will also see the number of graphics cores increase from seven or eight to nine or 10."

According to Gurman, the high-end chip for the 14- and 16-inch MacBook Pro models differs considerably from the ‌M1‌, hence why it does not seem right that it would be an "M1X." Gurman himself said that the "new chips differ from the ‌M1‌'s design." Even so, it would be a fair guess to assume that Apple's next-generation chip for the MacBook Pro would be called the "M1X" if it was not for the other rumored chip that actually is supposed to be based on the ‌M1‌.

The report is brought even further into question by speculation about the "M2" chip:

Apple is said to be reserving the M2 name for next year's chips, and that this will likely debut in a new MacBook Air.

It seems unlikely that Apple would brand its high-end chip that differs from the ‌M1‌'s design the "M1X," while branding another chip that is less powerful, a direct successor to the ‌M1‌, and based on its design, the "‌M2‌."

Given these two suspect claims, the rest of the report's validity is brought into question. The claim that the MacBook Pro will drop the front-facing logo circulated on Twitter in recent days, including a hint from leaker Jon Prosser, so it may simply be an echo of that speculation.

All of the other claims about the "M1X" chip and the redesigned MacBook Pros in the report, such as additional Thunderbolt ports, SD-card reader, and HDMI port, have been made before by reliable sources such as Gurman and Apple analyst Ming-Chi Kuo.

For more information about Apple's upcoming 14- and 16-inch MacBook Pro models, see our dedicated "Everything We Know" guide.

bwayne
Removing the MacBook Pro logo and replacing it with screen area is a good idea.
Score: 19 Votes (Like | Disagree)

fompsweeva
Maybe it's going to be a yearly identifier.

zorinlynx
Why the crap is Apple de-branding its stuff? First the iMacs and now the Macbooks? Don't they know seeing the words "Macbook Pro" especially when they show up in movies and such is great advertising?
Score: 14 Votes (Like | Disagree)

Manzanito
Shaky is the new dubious.
Score: 8 Votes (Like | Disagree)
Read All Comments

Saturday February 4, 2023 1:30 am PST by Hartley Charlton
Google's Chromium developers are working on an experimental web browser for iOS that would break Apple's browser engine restrictions, The Register reports. The experimental browser, which is being actively pursued by developers, uses Google's Blink engine. Yet if Google attempted to release it on the App Store, it would not pass Apple's App Review process. Apple's App Store rules dictate...
Read Full Article • 214 comments