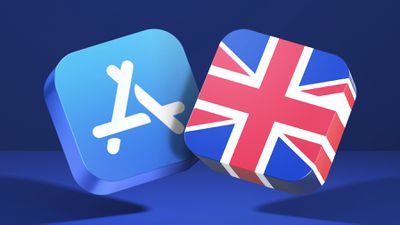 The collective action case alleges Apple's 30% commission on app sales and consumers' forced use of its own payment processing system generates "unlawfully excessive levels of profit," and calls for the company to compensate iPhone and iPad users in the U.K. for years of alleged overcharging, with damages of up to £1.5 billion being sought.

The collective action has been brought by Dr Rachael Kent, an expert in the digital economy and a lecturer at King's College, London, who claims that because the ‌App Store‌ is the only way to get apps on to an ‌iPhone‌ or ‌iPad‌, it is acting like a monopoly.

"The App Store was a brilliant gateway for a range of interesting and innovative services that millions of us find useful, myself included," she said. "But 13 years after its launch, it has become the only gateway for millions of consumers.

"Apple guards access to the world of apps jealously, and charges entry and usage fees that are completely unjustified. This is the behavior of a monopolist and is unacceptable."

In opt-out cases such as this, the claim can be brought on behalf of a defined group, and aggregate damages awarded to the group, without the need to identify all the individual claimants and specify their losses. Claimants within a class are automatically included in an action unless they take specific steps to opt-out.

On this basis, anyone in the U.K. who has bought paid apps, paid subscriptions, or other in-app purchases on an ‌iPhone‌ or ‌iPad‌ since October 2015 is included in the claim. The rest of the team behind the case includes law firm Hausfeld and Co and Vannin Capital. However, the collective action needs to be approved by the tribunal before proceeding.

Apple in a statement called the lawsuit "meritless."

"We believe this lawsuit is meritless and welcome the opportunity to discuss with the court our unwavering commitment to consumers and the many benefits the App Store has delivered to the UK's innovation economy," Apple said. "The commission charged by the App Store is very much in the mainstream of those charged by all other digital marketplaces. In fact, 84% of apps on the App Store are free and developers pay Apple nothing. And for the vast majority of developers who do pay Apple a commission because they are selling a digital good or service, they are eligible for a commission rate of 15%."

The case echoes similar allegations made in the ongoing legal battle between Apple and Epic Games, in which Epic alleges that the ‌App Store‌ and associated developer commission rates are anti-competitive and monopolistic.

In April, Apple was also charged by the European Commission with abusing its dominant position in the music streaming market with regard to ‌App Store‌ rules on in-app payments. The charges followed a complaint by rival streaming service Spotify.

djcerla
30% is industry standard, and Apple has a minority share of phones in the UK. Hardly a "monopoly".

These actions will end up ruining the iOS experience for consumers, which is at present far superior compared to the competitor's.
Score: 32 Votes (Like | Disagree)

_Spinn_
Class action lawsuits like this one are a total joke and usually just a way to enrich the lawyers.
Score: 26 Votes (Like | Disagree)

Hermes Monster
As a Brit, this fills me with absolute cringe. It’s nothing more than a cash grab, and I hope it gets shot down in flames
Score: 26 Votes (Like | Disagree)

markfc
Embarrassed I live in the UK with this one.
Score: 24 Votes (Like | Disagree)

These actions will end up ruining the iOS experience for consumers, which is at present leaps and bounds superior to the competition's.

Exactly! If efforts like this succeed I think someone should start a class action lawsuit against these people for ruining the ecosystem Apple users paid for. If I wanted Android I would have paid for an Android device. I bought my iPhone knowing full well what I was getting.
Score: 22 Votes (Like | Disagree)

And how exactly did Apple overcharge? Doesn’t the developer set the price?

Sounds like a lawyer that just wants publicity, at any cost.
Score: 18 Votes (Like | Disagree)
Read All Comments