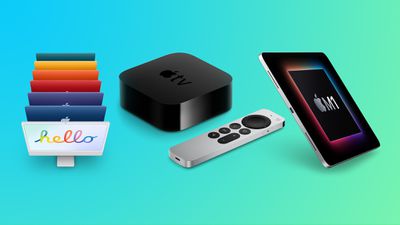 Pricing on the new M1 iPad Pro models, which are the fastest iPads to date, starts at $799 for the 11-inch version and $1099 for the 12.9-inch version, which also has a mini-LED display. The updated iPad Pros feature Thunderbolt connectivity, optional 5G, and up to 2TB storage.

Apple's new ‌M1‌ iMacs are priced starting at $1,299 for a 7-core GPU, and $1,499 for an 8-core GPU and additional color choices. The iMacs are equipped with the same ‌M1‌ chip that's in the MacBook Air, MacBook Pro, and Mac mini, and the radically redesigned machines feature a super slim body and a range of bright colors.

The second-generation Apple TV 4K is priced starting at $179 for 32GB of storage, and it is similar to the existing ‌Apple TV‌ 4K but with a faster A12 Bionic processor, and support for high frame rate HDR, plus it comes with a revamped Siri Remote with a touch-enabled clickpad. You can get the ‌Siri‌ Remote on its own or bundled with the ‌Apple TV‌ HD, which has not received an update.

Various other accessories such as the new Magic Keyboard for iPad Pro (available in black or white) can also be purchased starting today. Note that if you're getting a 12.9-inch ‌iPad Pro‌, last year's Magic Keyboard is compatible, but the fit may not be perfect when it's closed.

We do not know whether supplies will be limited, but it seems likely given Apple's recent comments on stock shortages for Macs and iPads and rumors of manufacturing issues for the 12.9-inch mini-LED display. Those who want one of Apple's new devices on launch day should aim to order as soon as possible.

Apple has not announced an official release date for the new iMacs, ‌iPad‌ Pros, and ‌Apple TV‌ models, but accidentally leaked information suggests that the new devices will begin arriving to customers on May 21.

Serban55
`So they can do it without shutting down the store
Score: 20 Votes (Like | Disagree)

itsmeaustend
I see why they take the site down most of the time. It’s a lot smoother, this is a damn mess.
Score: 14 Votes (Like | Disagree)

Lukomaldini
im not seeing them...

rosegoldoli
got myself a pink imac super excited
Score: 10 Votes (Like | Disagree)

Tuesday October 5, 2021 6:27 am PDT by Mitchel Broussard
Adorama today has a collection of deals on select Apple products, including the AirPods Max, Apple TV 4K, and M1 MacBook Pro. Note: MacRumors is an affiliate partner with Adorama. When you click a link and make a purchase, we may receive a small payment, which helps us keep the site running. Apple TV 4K You can get the 32GB Apple TV 4K for $159.00, down from $179.00. This is a new all-time ...
Read Full Article • 11 comments

Tuesday January 25, 2022 7:07 am PST by Mitchel Broussard
Amazon has dropped the price of the 2021 32GB Apple TV 4K, available for $159.99, down from $179.00. This discount will be seen after a $10 coupon is automatically applied at the checkout screen. Note: MacRumors is an affiliate partner with Amazon. When you click a link and make a purchase, we may receive a small payment, which helps us keep the site running. The Apple TV 4K is available...
Read Full Article • 20 comments

Friday December 10, 2021 7:45 am PST by Mitchel Broussard
Today we're tracking a new Amazon low price on the 2021 32GB Apple TV 4K, available for $149.99, down from $179.00. This $29 discount is now the lowest price we've ever seen on this model of the Apple TV 4K. Note: MacRumors is an affiliate partner with Amazon. When you click a link and make a purchase, we may receive a small payment, which helps us keep the site running. The Apple TV 4K is...
Read Full Article • 20 comments