Earlier today, Apple posted a Newsroom update reminding customers that the new 24-inch iMac, the M1-powered iPad Pro, and the updated Apple TV 4K will be available for pre-order starting tomorrow. Apple has said these new devices will be available in the second half of May, but now, it may have quietly confirmed a specific date. 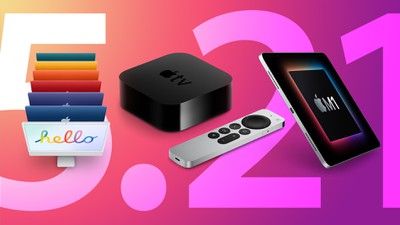 Spotted first by Jason Aten on Twitter, and confirmed by MacRumors, Apple's Newsroom update on its UK and Australian website has confirmed that the new devices will be available on May 21. Metadata within the Newsroom update says, "The all-new ‌iMac‌, ‌iPad Pro‌, ‌Apple TV‌ 4K, purple iPhone 12 and iPhone 12 mini, and AirTag arrive in stores and on doorsteps around the world May 21."

While the metadata says the new ‌iMac‌, ‌iPad Pro‌, and ‌Apple TV‌ will start arriving on May 21, the description is incorrect in saying that AirTags and the purple ‌iPhone 12 mini‌ and ‌iPhone 12‌ will also be arriving on the same day. ‌AirTags‌ and the newly colored ‌iPhone 12‌ became available for pre-order last week and will begin arriving to most customers tomorrow, Friday, April 30.

Update 8:01 a.m.: Apple has updated the metadata on its press release pages to remove the references to May 21. The description now reads: "The all-new ‌iMac‌, ‌iPad Pro‌, and ‌Apple TV‌ 4K arrive in stores and on doorsteps around the world in the second half of May. ‌iPhone 12‌ and ‌iPhone 12 mini‌ in purple and AirTag are available now."

not going to happen. they already said so. no plans to merge the two. Which means not happening anytime soon like at WWDC.

They also once said that video would never come to iPods… and then added video to the iPod.
they also said that third-party applications would never come to the iPhone… before promptly announcing the iPhone SDK 3 months later.
they said that Apple would never make a book store because no one likes to read books... then eight months later introduced the iBooks store.
just because Apple says something doesn’t always make it true.
if someone asked Steve Jobs in December 2006 if Apple was working on a smart phone, he would probably say either “no” or “we have great interest.”
either way, I think there’s no denying that within the next couple years, Apple has to do something to validate the iPad having all this power.
Score: 15 Votes (Like | Disagree)

Lounge vibes 05
OK but they won’t confirm what everyone actually cares about… The new remote.
Is that also May 21?
Score: 10 Votes (Like | Disagree)

Anthony Sullivan
It would have been nice if Apple let us look at the customisation options and prices for those before tomorrow.
Score: 6 Votes (Like | Disagree)

0-0
well done Jon prosser he got this one correct.
Score: 3 Votes (Like | Disagree)

It would have been nice if Apple let us look at the customisation options and prices for those before tomorrow.

GAH! Isn't that so weird? I want to upgrade the RAM on the iMac but it would be nice to know how much that's going to be. SHEESH!
Score: 3 Votes (Like | Disagree)

alex2792
Waiting until WWDC to see if the iPad Pro gets a way to run a full OS. If so I’ll pull the trigger immediately.
Score: 3 Votes (Like | Disagree)
Read All Comments

Friday May 7, 2021 6:55 am PDT by Sami Fathi
According to Apple leaker Jon Prosser, Apple's upcoming release of the MacBook Air will feature various colors, similar to the colors in the newly released 24-inch iMac. In the latest video of his YouTube channel Front Page Tech, Prosser says the same source who accurately provided him information on the first Apple silicon iMac coming in colors has told him that he recently saw a prototype...
Read Full Article • 349 comments