Apple today reaffirmed its long-standing commitment to create jobs and opportunities in the United States by announcing a $430 billion investment over the next five years. 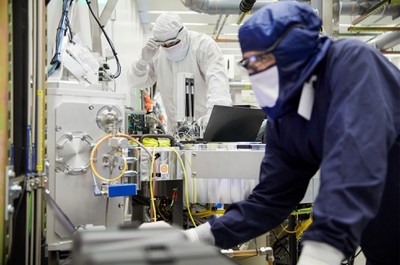 The new investment will help create more than 20,000 new jobs across the country and beats its previous investment of $350 billion announced in 2018. The new round of job creation will focus on innovations from 5G, next-generation silicon, and AI. CEO Tim Cook says that as countries slowly recover from the global health crisis, Apple is doubling down on its own responsibility to build a better tomorrow.

"At this moment of recovery and rebuilding, Apple is doubling down on our commitment to US innovation and manufacturing with a generational investment reaching communities across all 50 states," said ‌Tim Cook‌, Apple's CEO. "We're creating jobs in cutting-edge fields — from 5G to silicon engineering to artificial intelligence — investing in the next generation of innovative new businesses, and in all our work, building toward a greener and more equitable future.

As part of today's announcement, Apple also unveiled its plan to invest over $1 billion in North Carolina and build a new engineering and research center in the Research Triangle area. This investment alone will create at least 3,000 new jobs, in addition to a $100 million support fund for local schools and communities.

Apple will also establish a $100 million fund to support schools and community initiatives in the greater Raleigh-Durham area and across the state, and will be contributing over $110 million in infrastructure spending to the 80 North Carolina counties with the greatest need — funds that will go toward broadband, roads and bridges, and public schools. When up and running, Apple’s investments are expected to generate over $1.5 billion in economic benefits annually for North Carolina.

I thought that too initially, but think of all the other costs. R&D, physical buildings, and obviously the cost of the products/technology themselves.
Score: 6 Votes (Like | Disagree)

ArPe
Noice. Best thing to create upward mobility and education because so many were bored and getting brainwashed by mad people on Zuckerberg and Dorset’s brain destruction apps.

From these investments in education and engineering new honest platforms will come that will destroy the old platforms that hurt us so much.
Score: 5 Votes (Like | Disagree)

Are these numbers accurate? Because they could create *** way more*** jobs than that with $430B. Like, they could employ an entire US state.

This would likely be high paid engineers, researchers jobs.
Score: 3 Votes (Like | Disagree)

The timing of this announcement is strategic and telling. The last announcement was as the tax cuts and jobs act reduced their taxes and allowed them to repatriate money. It was meant to counteract those headlines and put them on Trump’s good side.

Now wirh anti trust pressure and a new admin they feel the need to announce again, 2 days prior to when they will also be announcing a raised dividend and increases buyback plan. It wouldn’t surprise me if this announcement means quite a large increase is being announced on Wednesday and this is the PR counter news.

For sure. No one every accused Apple of being stupid. Good PR move, good move. Good for US, good for the tech industry. win-win-win.
Score: 3 Votes (Like | Disagree)

iFan
This announcement is meant to counteract whatever Apple is about to announce financially on Wednesday after the bell. Increased buybacks, dividends, etc with large profit during difficult times for many others. PR want to get out front like they have historically with the repatriation of foreign cash announcement 3 years. Smart move, like always, Tim Cook.
Score: 3 Votes (Like | Disagree)

matrix07
There should be a campaign “Back To America”. Not bringing dirty manufacturing jobs to America but bring clean and modern manufacturing in area that’s possible.
Score: 2 Votes (Like | Disagree)
Read All Comments