The newly redesigned Siri Remote, which will be sold alongside the updated Apple TV 4K and is also available on a standalone basis, does not have a built-in U1 chip and does not appear to be compatible with the Find My app. 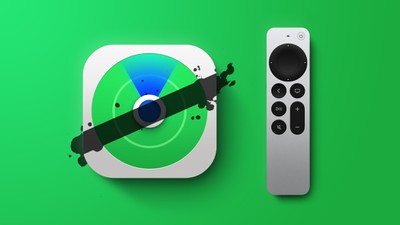 There is no U1 ultra wideband chip listed in the specs for the ‌Siri‌ Remote, nor is there a mention of the ‌Find My‌ app, and now Apple has confirmed to The Verge that it's not an oversight -- the remote does not have a U1 chip.

Ahead of the launch of the new 4K Apple TV there were rumors that the ‌Siri‌ Remote would have a Find My-like feature for locating it when it's lost inside the house, but that feature does not appear to have been implemented. If ‌Find My‌ were available for the remote in some capacity, Apple undoubtedly would have mentioned it as a feature.

Apple is perhaps expecting ‌Apple TV‌ users to add an AirTag to the back of the ‌Siri‌ Remote, which would allow it to be tracked via the ‌Find My‌ app.

It also appears that the 2021 iPad Pro models are lacking a U1 chip as well, though the new ‌Apple TV‌ does indeed have U1 support. U1 devices now include the iPhone 11 models, iPhone 12 models, new ‌Apple TV‌ 4K, and HomePod mini.

While no ‌Find My‌ capabilities are available for the second-generation ‌Siri‌ Remote, it does feature a revamped design with a touch-enabled clickpad.

turbineseaplane
I'm sure many will make excuses for Apple, but there is none here.

This is sloppy and not acceptable.

You design and release a new remote - a device that is frequently "lost" around the house - and don't absolutely include it in the U1 "locate me" plans?

tranceking26
That's strange, after the Airtags announcement and seeing how TV remotes are one of the most commonly lost items
Score: 50 Votes (Like | Disagree)

Wait, do people seriously need a tracking capability for a remote?

I just need the damn thing to ping with sound and yes find it. I have a toddler and a hungry couch.
Score: 35 Votes (Like | Disagree)

Geardo_Ranger
I kind of think of that as a missed opportunity in my mind LOL
Score: 22 Votes (Like | Disagree)
Read All Comments