Apple today announced the next-generation Apple TV 4K with a faster A12 chip and a completely redesigned Siri Remote pictured below. 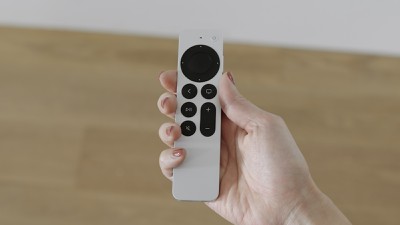 The new Siri Remote is included with the new Apple TV 4K, and the Apple TV HD going forward. The new remote will also be sold separately for $59 and is compatible with the previous-generation Apple TV 4K and Apple TV HD.

The all-new Siri Remote features a physical clickpad that offers five-way navigation, and the clickpad is also touch-enabled for swipe gestures that Apple TV users are already familiar with. The new Siri Remote also has a power button that controls a TV's power, and another for mute, making it the only remote needed while watching TV.

The new Siri Remote has a one-piece aluminum design that Apple says fits more comfortably in the hand, with silver being the only color option. The outer ring of the clickpad supports an intuitive circular gesture that turns it into what Apple calls a "jog control," which it says is perfect for finding a scene in a movie or show.

The new Apple TV 4K and new Siri Remote can be ordered starting Friday, April 30, with availability beginning at some point in the second half of May in the United States and more than 30 other countries and regions.

This story was part of our live coverage of Apple's ongoing "Spring Loaded" event today. Read our live blog for a recap of other announcements.

dugbug
Can we use this remote with last gen I wonder, and if so take my $
Score: 10 Votes (Like | Disagree)

mazz0
**** yes! Look at that remote! At last the worst product Apple ever made is dead!
Score: 7 Votes (Like | Disagree)

MacAddict1978
That price point is insanity. They needed to price this at $99. The remote is a much needed improvement, but I can see the Siri button getting hit endlessly where its at.
Score: 6 Votes (Like | Disagree)

Heelpir8
Felt good to yell "OH THANK GOD" when the presenter pulled the new remote out of her pocket.
Score: 5 Votes (Like | Disagree)

Do I see a mute button? Hallelujah!

I know, most exciting thing about for me too. Drove me nuts before and I always wished I could remap the Siri button to be mute. Also TV power button is nice to have.
Score: 4 Votes (Like | Disagree)

YankeeSR23
I love most of what they said, but there was no mention of adding the chip that allows for spatial audio. That’s what I REALLY wanted with a new Apple TV.
Score: 4 Votes (Like | Disagree)
Read All Comments