While we wait to see if rumors of a new iMac announcement today are accurate, popular 3D concept channel ConceptsiPhone and Khahn Design have taken a stab at envisioning what Apple's redesigned all-in-one desktop Mac could look like. Check out the pictures and video embedded below. 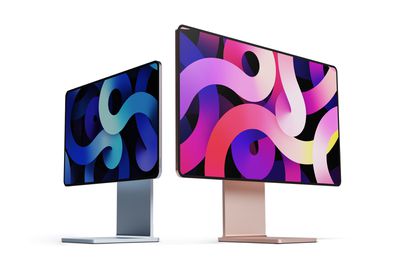 According to Bloomberg, Apple's redesigned ‌iMac‌ models will feature slimmed down bezels around the display and the metal chin will be removed. The new look is expected to be quite similar to the Pro Display XDR monitor that Apple released in 2019, and that's what we see here.

Instead of a curved rear design, the iMacs will feature a flat back, and prior rumors have described the new iMacs as using an "iPad Pro design language." At least one of the new models that will replace the 21.5 and 27-inch models will measure in at 23 to 24 inches, but it's not clear what size the second ‌iMac‌ will be.

Serial leaker L0vetodream has said that at least one of the new ‌iMac‌ models will feature a display that is much larger than the current 27-inch model, presumably due to reduced bezels.

Meanwhile, leaker Jon Prosser has suggested that the 2021 ‌iMac‌ models will come in five colors that match the colors of the fourth-generation iPad Air (Silver, Space Gray, Green, Sky Blue, and Rose Gold). This rumor has since been hinted at by L0vetodream, who suggested that the colorful new iMacs may be launched at Apple's "Spring Loaded" event.

Apple has developed underlying Mac support for Face ID, Apple's facial recognition technology. Apple initially planned to include it in the ‌iMac‌ refresh coming in 2021, but according to Bloomberg, it has been delayed and is not likely to be included in the first iteration of the new ‌iMac‌ lineup.

Apple is also expected equip the new iMacs with next-generation versions of its Apple silicon chips. Not only will be faster and offer more GPU power, better efficiency, cooler running chips, and tighter mainboard integration could allow for a thinner chassis.

References to two unreleased ‌iMac‌ models has been found in macOS Big Sur 11.3 beta code, identified as "iMac21,1" and "iMac21,2." Could they reference new models that take cues from Apple's first-generation ‌iMac‌ by coming in different colors? We may know for sure before the day is out.

Apple will hold its first media event of 2021 later on Tuesday, April 20, at 10:00 a.m. Pacific Time through a live stream. The event is expected to see the unveiling of updated iPad models, likely some information related to new features in iOS 14.5, and there's a possibility of a surprise like AirTags. Check out everything that's coming in our What to Expect guide.

Bonte
I'm hoping for an iMac like the MS Surface Studio done right, but I'm ready to buy any mac with M1+ at this moment.

Kung gu
people this is not REAL.
Score: 15 Votes (Like | Disagree)

It's still the most beautiful computer ever made.
And the monitor arm was awesome.
Score: 14 Votes (Like | Disagree)