New content is today arriving on Apple TV+ and Apple Arcade, in "The Snoopy Show" and puzzle game "Lumen." To celebrate the launch of The Snoopy Show, Apple has transformed its apple.com homepage. 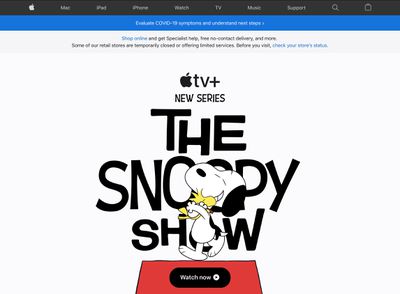 Starring the world's most famous Beagle, and his best bud, Woodstock. He's a dog like no other — whether he's flying high in the sky, or searching for treasure at the bottom of the sea, he's always up to something fun. So gather your gang, and get ready to follow along with The Snoopy Show, only on Apple TV+.

The Snoopy Show marks Apple's second series made in partnership with WildBrain (formerly DHX Media) and its subsidiary, Peanuts Worldwide. In 2019, Apple debuted faux documentary "Peanuts in Space: Secrets of Apollo 10," and "Snoopy in Space," following Snoopy and the Peanuts gang as Snoopy pursues his dream of being an astronaut.

Apple won an Emmy for Outstanding Children's or Family Viewing Program for Peanuts in Space, and it has committed to producing a range of new "Peanuts" content in the future.

lumen. is a puzzle game with unique mechanics, where you have to solve levels by using lights, mirrors, and lenses.

You will find yourself in the old attic of Olivia McLumen and discover her mysterious vintage lumen box. Olivia McLumen lived in Scotland over 100 years ago and was a great inventor of her time. Solve puzzles to recreate the stories of her inventions!

The Snoopy Show is streaming now on Apple TV+ with a season of six episodes, and Lumen is available to download now on ‌Apple Arcade‌.

ArPe
For a sec I thought it was Lumines, which is probably the best puzzle game of all time.
Score: 5 Votes (Like | Disagree)

For a sec I thought it was Lumines, which is probably the best puzzle game of all time.

You’re not the only one. Some years back, I got my hands on a semi-bricked PSP and determined I could probably restore it to stock firmware and update to the latest firmware using the Lumines exploit. Since I definitely was gonna buy a copy of Lumines anyway, I definitely wasn’t complaining! I think there is or was an iPhone puzzle game by the creator of Lumines a few years back.

2010mini
Nice. The wife and I will definitely watch this with our little one.
Score: 3 Votes (Like | Disagree)

Apple_Robert
Yay for Snoopy and the Peanuts gang. I will definitely be watching.
Score: 3 Votes (Like | Disagree)
Read All Comments