In its ongoing feud with Apple regarding App Tracking Transparency, Facebook has announced that it will encourage users to allow tracking with "additional context" on a dedicated screen, according to an updated blog post. 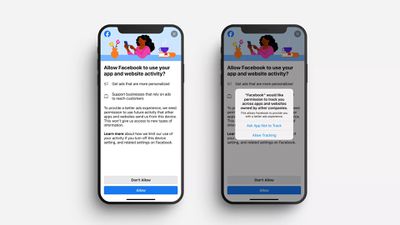 iOS 14's App Tracking Transparency feature will require developers to receive a user's consent to track their activity across apps and websites and access their device's random advertising identifier. Users will be presented with a prompt with options to "Allow Tracking" or "Ask App not to Track" when opening apps, such as Facebook, that wish to track their activity.

If a user selects "Ask App not to Track," Apple will block the app's developer from accessing the user's advertising identifier. The developer is also required to respect the user's tracking preference in general, meaning that they cannot use other methods to track the user, or their app may face removal from the App Store.

After a series of heavy-handed public attacks on Apple in recent months, which have in part alleged that App Tracking Transparency will harm small businesses, Facebook now seems to have shifted its approach and will now be actively encouraging users to "Allow Tracking."

As we shared in December, we disagree with Apple's approach, but will be showing their prompt to ensure stability for the businesses and people who use our services. Apple's new prompt suggests there is a tradeoff between personalized advertising and privacy; when in fact, we can and do provide both. The Apple prompt also provides no context about the benefits of personalized ads.

Facebook will show users a screen in its app, before Apple's App Tracking Transparency prompt is displayed, offering information about how the company uses personalized ads, which it says "supports small businesses and keep apps free." The company has warned that users who decline to be tracked "will still see ads, but they will be less relevant."

Agreeing to these prompts doesn't result in Facebook collecting new types of data. It just means that we can continue to give people better experiences. We feel that people deserve the additional context, and Apple has said that providing education is allowed.

Facebook is now believed to be preparing a lawsuit against Apple for the App Tracking Transparency feature, among other allegations, which the company says is anticompetitive.

robinp
What's the benefit of personalised ads? The best ad is the non-existent ad. There are no benefits to me in having any advertising, certainly not advertising that necessitates invasion of privacy.
Score: 24 Votes (Like | Disagree)

and 1989 others
People should bite the bullet and delete facebook. There are other ways to communicate with friends and family (dare I say using the phone feature, on our iphones). I got rid of all social media last May. Missed out on nothing, and still in contact with the friends that actually care.
Score: 24 Votes (Like | Disagree)