Apple Shares Picks for Best Books, Audiobooks, and Podcasts in 2020

At the end of each year, Apple shares its picks for the best App Store apps, podcasts, Apple Music songs, books, and more, and today the company is highlighting the top books, audiobooks, and podcasts of 2020. 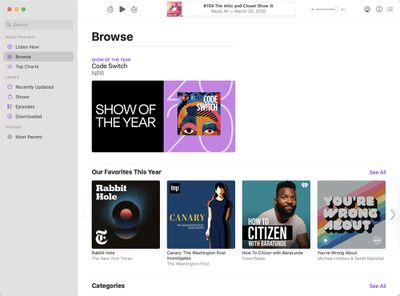 Code Switch by NPR was named the Apple Podcasts: Show of the Year, which is a new category for 2020.


Apple also highlighted the top 10 biggest shows of 2020, which include Stuff You Should Know by iHeart Radio, This American Life, The Daily by New York Times, and Crime Junkie by audiochuck.

Apple's favorite podcast picks include California Love by LAist and KPCC, Canary by The Washington Post, Dying for Sex by Wondery, and FANTI by Maximum Fun. Apple also highlighted the biggest new shows of 2020, a list that includes Unlocking Us, Nice White Parents, CounterClock, Red Ball, and others.

The most popular books of the year included "Midnight Sun" by Stephenie Meyer, "American Dirt" by Jeanine Cummins, and "A Promised Land" by Barack Obama.

Apple's picks for best books of the year include "The Vanishing Half" by Brit Bennett, "28 Summers" by Elin Hilderbrand, "The City We Became" by N.K. Jemisin, and "Long Bright River" by Liz Moore.

Apple named audiobooks that include "Open Book" by Jessica Simpson, "Memorial Drive" by Natasha Tretheway, and "Upstream" by Dan Heath as the best audiobooks of 2020, among others.

Apple's full lists can be found in the Books and Podcasts apps on iPhone, iPad, and Mac.

mcdawg
This list is about as enlightening and decent as the degenerate garbage that Apple pushes every time I open Apple Music* or the movie store.

Looking to Apple Inc. for cultural guidance is like filling your water bottle from the sewage pipe.

*just started the trial; I hope going back to my beloved Match after signing up for Apple Music isn’t going to be a problem.
Score: 10 Votes (Like | Disagree)

chrisplowman
These appear to be regional. The UK has The Joe Wicks podcast as it’s Show of the Year.

Mike MA
Now those best-of reviews coming up again is making me aware that some crazy year 2020 will be over soon.
Score: 1 Votes (Like | Disagree)
Read All Comments

Apple Shares Trailer for 'The Problem With Jon Stewart,' Show to Be Accompanied by Podcast

Monday August 30, 2021 5:20 am PDT by Hartley Charlton
Apple has today shared a trailer for "The Problem with Jon Stewart" and announced a companion podcast for the show, ahead of its premiere on Thursday, September 30. Stewart himself stars in and executive produces the current affairs show, in what will be the former "Daily Show" host's first series since he left Comedy Central in 2015. Apple describes the series as follows: "The Problem...
Read Full Article • 36 comments

Tuesday November 30, 2021 5:34 am PST by Hartley Charlton
Apple has today shared a press release celebrating the best and most popular podcasts of 2021, as curated by the Apple Podcasts editorial team. Apple named "A Slight Change of Plans" with Maya Shankar as "Best Show of the Year." The show combines storytelling with cognitive and behavioral science to help listeners navigate change in their lives, including real-world stories about change when ...
Read Full Article • 19 comments

Thursday June 17, 2021 12:28 am PDT by Tim Hardwick
Following in the footsteps of Apple and Spotify, Facebook will launch its own podcast platform offering next week, based on emails seen by The Verge. According to the messages, which were sent to podcast page owners, Facebook will roll out the podcast service on June 22, and content creators will be able to link their show's RSS feed to Facebook, which will generate News Feed posts for all...
Read Full Article • 33 comments

Wednesday May 25, 2022 8:56 am PDT by Hartley Charlton
Leaker Jon Prosser today shared ostensibly accurate renders of the iPhone 14 Pro, providing the most accurate look yet at what the device could look like when it launches later this year. In the latest video on YouTube channel Front Page Tech, Prosser revealed renders of the iPhone 14 Pro made by Apple concept graphic designer Ian Zelbo, highlighting a range of specific design changes...
Read Full Article • 100 comments