Following Apple's confirmation that it still plans to introduce a new App Tracking Transparency feature that will let users know when companies want to track them across apps and websites, which has attracted criticism from companies such as Facebook, Craig Federighi has explained more about the rationale behind the change to The Independent. 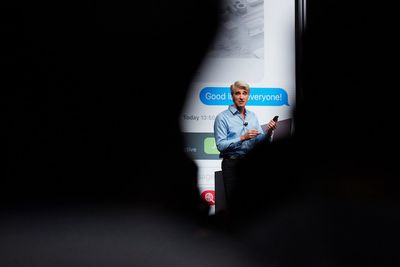 The App Tracking Transparency feature allows users to opt-out of data collection and choose whether advertisers can track their activity. While it was originally supposed to arrive with iOS 14 earlier this year, Apple postponed the feature until early 2021 to give developers more time to accommodate it.

Federighi told The Independent that the new feature can be put down to Apple's support for privacy as a "core value" that has been present "since the beginning of the company," citing how Steve Jobs highlighted the Apple II's ability to allow users to secure their own information on floppy disks and have control over their data.

He said that the feature would ultimately be "better for even the people that are currently, at times protesting those moves," because it increases trust between users, developers, and advertisers. Federighi also said that similar concerns had been raised in the past about new privacy features, but they did not result in long-term issues, and eventually became widespread across the industry:

We introduced intelligent tracking prevention, several years ago, and at the time, parts of the ad industry were saying that the sky was going to be falling in and that their business was going to be destroyed by the fact that they couldn't track everyone from website to website to website. Well, in fact, if you look at what happened to the industry, that didn't happen at all, and yet we also protected user privacy.

Federighi also noted that Apple is not the largest manufacturer in most markets and implied that customers can choose whether or not they want to buy an Apple device:

If we sell cars without airbags, and we decided to put airbags in our cars before someone else did, and customers want to buy those, I think it's great that we've provided that that choice. We're not waiting for someone to require we do it, we're making that part of what it means to use our platform.

Federighi confirmed that Apple's decision to postpone the feature was singularly due to the concerns of some developers who feared that opting out of ad tracking would impact how their apps work, rather than disputes with the ad industry.

Although Apple has not announced any further privacy protection features that could affect the ad industry, Federighi said "we're going to watch and see what happens and try to make sure that we can keep the ecosystem healthy," hinting that more changes could be made in the future.

Finally, Federighi pointed to some of Apple's privacy features that have benefited users in the past, while still preserving the needs of the ad industry. He specifically mentioned the SKAdNetwork tool, which allows developers to track when an ad had led to a sale of a product, which has become a key metric for many advertisers, saying "we created a framework for doing that in a privacy-protecting way."

Future updates, he said, could bring more ways for the ad industry to "improve their ability to do effective advertising while preserving privacy, and we want to work technically on solutions to make that more and more effective."

Read the full interview at The Independent.

eicca
The fact that Apple insists that privacy matters is the sole reason I will not switch to any other ecosystem.
Score: 53 Votes (Like | Disagree)

TonyC28
There is nothing to defend or explain, Craig. Keep up the good work. When Facebook is whining you are doing something right.
Score: 40 Votes (Like | Disagree)

smithrh
He doesn't need to defend it, he needs to get it going.
Score: 38 Votes (Like | Disagree)

Imagine if Facebook made a phone. It would be free, come pre-installed with ads, already have all of your personal and contact information, and a virtual assistant named “Boris.”
Score: 29 Votes (Like | Disagree)

dannyyankou
No need to defend yourself Craig, FB can eat crap
Score: 24 Votes (Like | Disagree)
Read All Comments