Apple is working on a foldable iPhone prototype that features two separate display panels that are connected by a hinge rather than a single display like the Samsung Galaxy Fold, according to leaker Jon Prosser who shared the info in a tweet and a YouTube interview shared by Jon Rettinger. 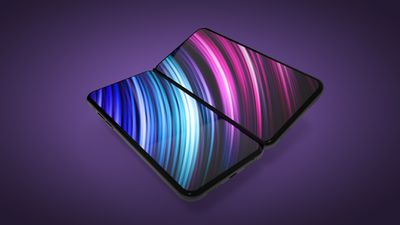 A mockup of an ‌iPhone‌ that has two displays and a hinge
Prosser says that the foldable ‌iPhone‌ has rounded, stainless steel edges like the current iPhone 11 and no notch, but a "tiny forehead" on the outer display for Face ID.

The memes are funny — but it doesn’t look like they just stuck two phones together. Even though they’re two separate panels, when the displays are extended, it looks fairly continuous and seamless. — Jon Prosser (@jon_prosser) June 15, 2020

Though the ‌iPhone‌ features two separate displays connected by a hinge, Prosser claims that the panels look "fairly continuous and seamless."

Samsung's Galaxy Fold
Samsung's foldable smartphone, the Galaxy Fold, is designed as a single display with a fold in the middle that allows it to open and close. Prosser believes that Apple's version that's in the works looks more similar to Microsoft's Surface Neo and Surface Duo, both of which are foldable dual display devices that feature two displays connected with a hinge.

Microsoft's Surface Neo and Duo
There's no word on when Apple might develop a foldable ‌iPhone‌, but there have been rumors about work on such a device dating back to 2016, as well as a number of patents. A March 2020 patent described a device that featured two separate displays that could be brought together to create a single bendable device with a hinge.

JPack
For people that don't understand folding phones, the idea is pretty simple.

You get a bigger screen in a smaller form factor. It's extremely inefficient to scale up the body of an iPhone just to match the display size.
Score: 21 Votes (Like | Disagree)

For people that don't understand folding phones, the idea is pretty simple.

You get a bigger screen in a smaller form factor. It's extremely inefficient to scale up the body of an iPhone just to match the display size.

moabal
What would even be the point of this? I have thought long and hard about these foldable phones/tablets and I do not see how it helps anyone other than a niche group of people.
Score: 12 Votes (Like | Disagree)

macsplusmacs
You know, I visualized what this would be like in my mind just now, and HAVING to unfold my phone each time, man this does not conform to the way I use my phone, I will pass and just keep using a BIG phone like the iphone 12 pro max and my ipad pro for bigger work that I need to get done.

And Glasses. give me my apple glasses.
Score: 7 Votes (Like | Disagree)

kemal
Because Apple need a phone in the $3000 range.
Score: 6 Votes (Like | Disagree)
Read All Comments