Following the release of macOS Big Sur this week, a number of apps have received compatibility updates for the latest operating system. Many of the apps have also been updated with native support for Apple Silicon Macs with the M1 chip. 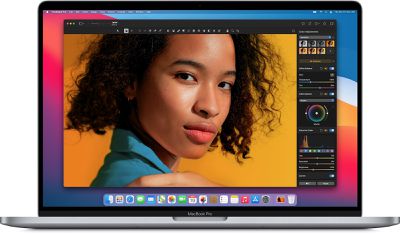 Launching on November 19, image editing app Pixelmator Pro 2.0 features an all-new design for macOS Big Sur, ranging from a simplified Effects Browser to new layouts for the sidebars and presets. A new Workspaces feature lets users customize the look of Pixelmator, with presets optimized for photo editing, design, illustration, and painting. The app is also universal now, with native support for both Apple Silicon Macs and Intel-based Macs.

Pixelmator Pro 2.0 takes advantage of the M1 chip's 16-core Neural Engine for accelerated machine learning. This allows features like Super Resolution, which intelligently increases the resolution of images while preserving details, to work up to 15x faster.

Writing app Ulysses has been updated with a new design and icon for macOS Big Sur, as well as native support for Apple Silicon Macs. There is also a refined Revision mode with a dedicated view outside of the dashboard, and a new "editor focus" mode that hides all chrome and presents sidebars as overlays. Version 21 of Ulysses for Mac is available now.

Blackmagic Design today announced that it has released a new beta of its popular filmmaking app DaVinci Resolve with native support for Apple Silicon Macs. The recently released DaVinci Resolve 17 is a major new release with over 300 new features and improvements, including HDR grading tools, redesigned primary color controls, and more.

Earlier this week, we highlighted other universal apps like Darkroom, Fantastical, and djay Pro AI.

The first Macs with the M1 chip will begin arriving to customers on Tuesday, and we'll be sharing more universal apps in the coming days.

yoak
8K on a Mac mini in native arm Resolve. Say no more. I’m impressed by Apple and BM
Score: 13 Votes (Like | Disagree)

Not the gold standard, sorry. It's nice, but no match for Dreamweaver.

4jasontv
All of this sounds great. Except for Ulysses which should run on a potato.
Score: 8 Votes (Like | Disagree)

HiRez
And as expected, Adobe is right out in front on thi...never mind
Score: 7 Votes (Like | Disagree)

sfwalter
DaVinci Resolve is a huge win. By the end next week the youtubers should put DaVinci Resolve thru its paces and we will have a clear picture of how good the M1 chip really is.
Score: 7 Votes (Like | Disagree)
Read All Comments