Algoriddim has today unveiled djay Pro AI for Mac, a universal app that can run natively on the M1 chip and take advantage of Apple's 16-core Neural Engine. 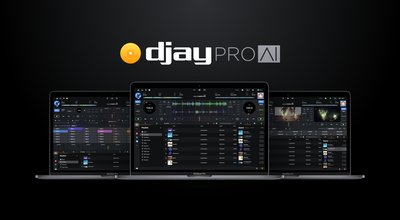 djay Pro AI allows users to separate vocals and instrumentals in real-time, as well as crossfade between individual components of two songs independently. This allows for impressive remixing capabilities as DJs can easily swap bass lines or melodies of two songs while their keys and beats are automatically matched. The "Neural Mix" feature can isolate beats, instruments, and vocals of any track.

djay Pro AI and its groundbreaking Neural Mix technology are profoundly impacting DJing and remix culture as a whole. And we're thrilled to bring it to the Mac. With the power of Apple's ‌M1‌ chip we're doubling down on machine learning to introduce new features that mark a breakthrough in digital audio, including the possibility to apply audio effects not only on the whole track but on individual components of a song. The all-new streamlined user interface shines on macOS Big Sur and will offer DJs unprecedented tools to fine-tune their skills and mix music like never before.

djay Pro AI is available now on the Mac App Store. There is an optional Pro subscription for $6.99 per month or $49.99 per year that offers full access to all content and features, and djay for iOS subscribers will get the complete djay Pro AI for Mac as part of their existing Pro subscription.

This opens up an interesting thought.....a reversal of the status quo where currently Mac apps are [normally poorly] compared against their Windows versions. App developers now offer 15x performance, but only on AS.

Who on earth wants an Intel (either Mac or Windows) based machine when I get get 15x performance on an entry level MBA?

Increasingly feeling like AS is going to do to the laptop/desktop market what iPhone did to the mobile market. I recognise this is hyperbole at the moment, but give it a couple of years...

Hyperbole, maybe, but I keep saying the same thing everywhere. The M1 is Apple's first desktop chip AND it's the "low end" chip. If a low end chip is bringing this kind of kick-in-the-pants processing power, we ain't seen nuttin' yet.
Score: 9 Votes (Like | Disagree)

We're seeing values of up to 3x for graphics intensive apps. 15x in audio apps (machine learning performance) and people are coming out of the woodwork to praise their fireplace-starting i9s.

Why a subscription though? I would love to buy a new MacBook Pro for my brother and include this as a gift since he is an avid DJ. But I don't want to put the responsibility on him with a subscription.

I believe the subscription model allows them to continuously advance and develop the platform though investment and even obtain necessary funding to do so because the have provable recurring revenue to support it. It also lowers the cost of entry while offering cutting edge advantages
Score: 5 Votes (Like | Disagree)

This opens up an interesting thought.....a reversal of the status quo where currently Mac apps are [normally poorly] compared against their Windows versions. App developers now offer 15x performance, but only on AS.

Who on earth wants an Intel (either Mac or Windows) based machine when I get get 15x performance on an entry level MBA?

Increasingly feeling like AS is going to do to the laptop/desktop market what iPhone did to the mobile market. I recognise this is hyperbole at the moment, but give it a couple of years...
Score: 4 Votes (Like | Disagree)

Unfortunately, it seems subscriptions is where everything goes in terms of [S]music[/S] all software

Fixed that for you. It is unfortunate, but it is the reality of it since so many people buy into it (thank you Netflix and music subscriptions).
Score: 2 Votes (Like | Disagree)

I believe the subscription model allows them to continuously advance and develop the platform though investment and even obtain necessary funding to do so because the have provable recurring revenue to support it. It also lowers the cost of entry while offering cutting edge advantages

This is more elegantly put that I ever could. Even in places like India and Thailand where software piracy was/is ramped and open, Adobe and others using affordability(their is API's for this) have let more people get access to this software legitimately that it ever was when it used to cost thousands.
Score: 2 Votes (Like | Disagree)
Read All Comments