Apple today seeded the first betas of upcoming iOS 14.3 and iPadOS 14.3 updates to public beta testers, one day after providing the betas to developers. 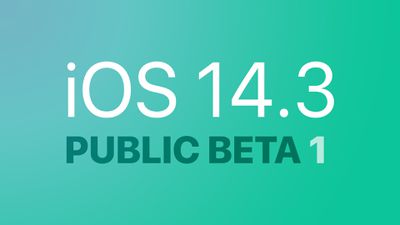 Public beta testers who have signed up for Apple's beta testing program can download the iOS and iPadOS‌ 14.3 updates over the air after installing the proper certificate from the Public Beta website on an iOS device.

iOS 14.3 introduces the ProRAW feature Apple announced at the iPhone 12 launch to the ‌iPhone 12‌ Pro and 12 Pro Max. ProRAW lets those who prefer to shoot in RAW take advantage of the Apple image pipeline data like noise reduction and multi-frame exposure adjustments while still using the RAW format.

Ecosia, the search engine that plants trees when people conduct searches, can now be set as the default search engine on iPhone and iPad as an alternative to Google, DuckDuckGo, Yahoo, and Bing.

iOS 14.3 includes an icon that seemingly unveils the design of the AirPods Studio, along with code supporting third-party item trackers and Bluetooth devices in the Find My app. Apple mentioned this feature in June when iOS 14 was unveiled, and it seems we could soon be seeing third-party devices that are able to be tracked via ‌Find My‌.

iOS 14.3 also includes pregnancy data in the Health app, third-party app suggestions at setup in certain countries, support for scanning App Clips QR codes with the camera app, an option to update HomeKit products with the Home app, and more, with full details available in our iOS 14.3 features guide.

Find My needs a rename.

tazhombre
Find My needs a rename.
Score: 7 Votes (Like | Disagree)

I’m just here to see how long it takes for someone to use the words “massive”, “failure”, or “disaster”, in a post.

This update is massive at 5.05 GB! I think I'm getting some kind of failure because it won't download, just kind of sits there. I think it's time for lunch, my breakfast was a disaster so I just had some toast.
Score: 5 Votes (Like | Disagree)

fraXis
Hopefully, this includes a fix for the missing text messages:

CJ Dorschel
Been running the DP since yesterday and noticed app updates are now happening automatically as they should. Before I still had to open the App Store, click on my profile, refresh, then update manually. Now they’re updating automatically just like the new TestFlight update. Otherwise, running well on an iPhone 11 Pro (not updating to the 12 this year - don‘t need 5G as I’m always on wifi and the camera doesn’t seem as good as the 11 Pro, images seem washed out).
Score: 4 Votes (Like | Disagree)

Already running on my "about to be retired" iPhone X. No biggie on anything just yet, but I'm totally tempted to checkout ProRAW and how it plays with Photoshop.

I hope you have a 12 Pro because you’ll need one to shoot in ProRAW....
Score: 3 Votes (Like | Disagree)
Read All Comments