Apple today announced that Oprah Winfrey will be interviewing President Barack Obama on Apple TV+ series "The Oprah Conversation," with the episode set to air on Tuesday, November 17 at 6:00 a.m. Pacific/9:00 a.m. Eastern. 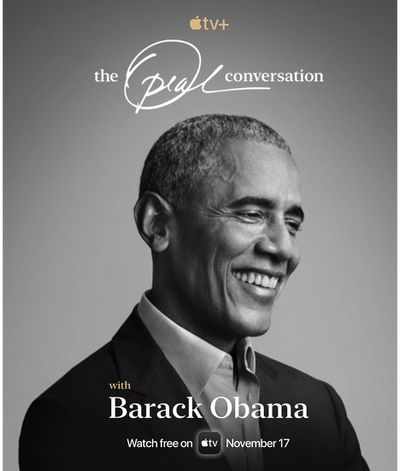 The interview will cover Obama's memoir "The Promised Land" along with discussions about his legacy, democracy, race, and the American Dream. He will discuss the years leading up to his presidency and reflect on the "aspirations, perseverance and accomplishments that brought him to the White House."

"This book was worth the wait," said Oprah Winfrey. "Everybody who reads it is going to be on this journey from the grueling and monotonous grind of the campaign, to taking us inside the Oval Office and the Cabinet Room and the Situation Room and sometimes, even the bedroom. This book has both the intimacy and the grandeur coming through in this memoir, and I have so been looking forward to speaking with him about all of it."

thadoggfather
I really genuinely un-sarcastically have pity for anyone who spends their rather limited leisure time still fantasizing about a former President, especially a media propped up one whose accomplishments include, but are not limited to:
-appearing on as many frivolous late night shows and Hollywood skits as humanly possible as an entertainer (because he doesn't have an ego, only our current president does - and he can be all places at once, to both entertain and lead at the same time),
-putting kids in cages,
-initially being against gay marriage
-taxing the uninsured,
-bombing Yemen,
-turning a blind eye to Benghazi and using a 'YouTube video' as the excuse for its incitement,
-promoting and chiming in on faked hate crimes,
-solidifying and furthering identity politics culturally,
-sending cash to Iran,
-weaponizing IRS and our IC against his political opponents
-apologizing for America internationally,
-going after journalists more than any other previous administration (actually going after, not just 'mean tweets' when they are willfully dishonest)
-always telling Americans they have to work harder and its not enough for his approval,
-artificially inflating jobs numbers because people working multiple part time and/or poorly paying jobs,
-claiming responsibility for economic growth of his successor despite saying it would impossibly require a magic wand
-spying on an incoming administration and working against it every single day of his retirement
-unmasking a private citizen
-misleadingly and unwisely 'warning' North Korea was the biggest threat he would face, and all it took was a conversation -- seems the biggest threat is in house

But he has a fantastic smile and wonderful oration skills and D next to his name, so foggetaboutit

Buy the endless supply of books, listen to the podcasts, watch the shows. It cannot and will not ever be enough. OBEY!

Life is short. 'Come on man' make it rain on those dislikes :D

superlawyer15
Exactly zero interest in hearing from him or Oprah
Score: 71 Votes (Like | Disagree)

Why can’t I remove the ‘Social Justice’ topic from the top of my Apple News feed?
Score: 66 Votes (Like | Disagree)

Mansu944
Nobody wanted to listen to him last month and nobody does now either,
Score: 66 Votes (Like | Disagree)

crawfish963
I wonder if he talks about drone striking US citizens without due process in his book.
Score: 64 Votes (Like | Disagree)

Unity451
Your friendly reminder that even Apple has a political agenda.
I'm looking forward with Oprah's interview with Trump... oh wait... that's not happening? ...weird... :rolleyes:
Score: 63 Votes (Like | Disagree)
Read All Comments