Prior to the launch of the HomePod mini, Pandora today updated its app designed for iOS devices to add in HomePod integration. ‌HomePod‌ support for Pandora was a feature that Apple promised would come in software updates this fall, right alongside iOS 14. 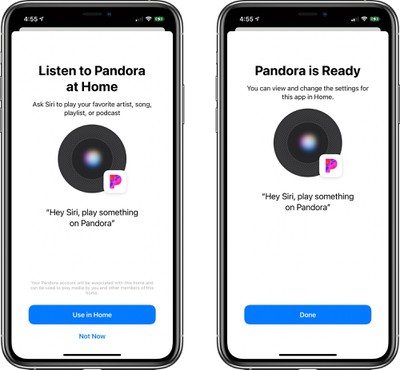 With the Pandora ‌HomePod‌ integration, ‌HomePod‌ owners (and future ‌HomePod mini‌ owners) can ask Siri to play content directly from Pandora as an alternative to Apple Music. Prior to ‌iOS 14‌, ‌HomePod‌ was designed to work only with ‌Apple Music‌, and third-party music services needed to be streamed to ‌HomePod‌ using AirPlay.

According to Pandora, ‌HomePod‌ integration requires the latest version of the Pandora app. Once it's installed, open the Pandora app on an iPhone or an iPad, and then select Profile > Settings > Connect With ‌HomePod‌ > Use in Home to get it working. Music can be requested from Pandora by adding "on Pandora" to any ‌Siri‌ request for a song.

Pandora can be downloaded from the App Store for free. [Direct Link]

Unggoy Murderer
Meanwhile, here's Spotify claiming that Apple have a monopoly and require users to use Apple services.

haganah
Now if only Spotify hurries up and integrates with SiriKit ('https://developer.apple.com/documentation/sirikit') or whatever they need to do, I'll be super happy.
Score: 5 Votes (Like | Disagree)

Kermit262
Big news. I want to give HomePod minis for Xmas gifts this year but not all recipients have Apple Music. This is a welcome change.
Score: 4 Votes (Like | Disagree)

Now if only Spotify hurries up and integrates with SiriKit ('https://developer.apple.com/documentation/sirikit') or whatever they need to do, I'll be super happy.

Could easily take them a year or more based on their support of Apple Watch offline playback and direct streaming. They like to bitch about Apple but when it comes to supporting Apple devices, they’re like, Apple who?
Score: 2 Votes (Like | Disagree)

deaddog
^Agreed. I’ve tried all the streaming services and always come back to Pandora. Much better algorithms for radio stations. I’ve found more music through this service that I wouldn’t have found otherwise. Glad to see them move quick to add HomePod support too.
Score: 2 Votes (Like | Disagree)

I have almost forgot about Pandora .

Ironically they're the only company other than Apple offering full watch support and now first to HomePod.

I gotta say, they still have the best music algorithm for channels.
Score: 2 Votes (Like | Disagree)
Read All Comments

Thursday May 13, 2021 10:32 pm PDT by Sami Fathi
A new rumor suggests that Apple will announce the third-generation AirPods and the recently rumored HiFi, or high-fidelity Apple Music tier, on Tuesday, May 18, via a press release on its website. The new rumor comes from Apple YouTuber Luke Miani who shared the alleged exclusive news with the AppleTrack website. According to the YouTuber, Apple plans to release the next-generation AirPods...
Read Full Article • 192 comments

Friday May 14, 2021 11:52 am PDT by Juli Clover
Following the discontinuation of the iMac Pro, Apple also appears to be discontinuing Space Gray "Magic" accessories that it sold separately alongside the iMac Pro. The iMac Pro was the only Space Gray Mac, and Apple designed special matching accessories for it. The Space Gray Magic Mouse 2, Magic Keyboard, and Magic Trackpad all now say "While supplies last" in small wording at the bottom...
Read Full Article • 349 comments

Sunday May 16, 2021 2:39 pm PDT by Eric Slivka
The Browse tab in the Music app across Apple's platforms has started displaying a prominent teaser hinting at an upcoming major announcement for Apple Music. Under the heading "Coming soon," the headline says "Get ready – music is about to change forever." An accompanying "Tune-In Video" simply shows an animated Apple Music logo. Rumors have indicated that Apple is preparing to launch a...
Read Full Article • 110 comments