Last week, a listing appeared in the Bluetooth product database for an Apple product with a placeholder name "B2002" and a model number of "TBD." MacRumors was alerted to the listing by health and fitness tech website MyHealthyApple. 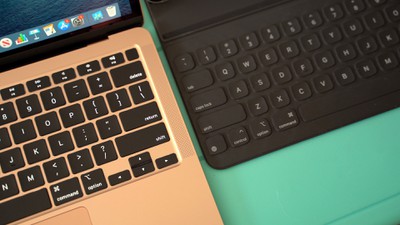 The product is filed under the "personal computer" category, which Apple has used for previous Mac and iPad listings in the database, so it is hard to pinpoint the listing to a specific product at this time. The listing could simply end up being for the new iPad Air unveiled last month, but it could also be for the first Apple Silicon Mac or something else.

The listing's Qualified Design IDs also correspond with previous listings for both Macs and iPads, so that doesn't help pinpoint things either.

Published on October 22, the listing was Apple's first public-facing entry in the Bluetooth product database since late 2019. However, since many Apple products use the same Bluetooth specifications, Apple is often able to simply update its previous listings in the database with new products as they are released.

Rumors suggest that Apple plans to unveil its first Mac with a custom Apple Silicon processor at a November 17 event. Other rumored products in Apple's pipeline include its long-awaited AirTags item trackers, AirPods Studio over-ear headphones, and a new gaming-focused Apple TV, but launch dates for those products are less certain.

We know that the first Apple Silicon Mac will arrive before the end of 2020, because Apple promised so in a press release earlier this year. At the time, Apple said it also still had "exciting" new Intel-based Macs in development.

Holy ****....its all leaking....again! Just like with the iPhone, the Apple Watch, and the iPad Air...the AS Macs are leaking....no.....I wanted to remain spoiler-free and be surprised come early-mid Nov when Apple inevitably does a rare Nov Press Event showing off these new machines....

First, it was the reveal of the desktop AS Macs coming early next year, and now this....what's next? the actual leaked image of the chassis?

Man, at this rate, everything will be leaked before the event....

I should maybe turn off Twitter and stay off of MacRumors for the better part of the next 2-3 weeks, what do you say, MacRumors?

Since the iPad Air 3 was Bluetooth 5.0, the iPad Air 4 might have been an update of the existing listing and would not be the reason for this one.

So possibly more evidence of an ASi Mac coming soon.

MrGuder
Does it have MagSafe? Lol
Score: 5 Votes (Like | Disagree)

Tuesday March 23, 2021 3:30 pm PDT by Juli Clover
Apple in November started releasing Macs with Apple-designed M1 chips, and the Apple silicon technology will eventually replace all the Intel chips that Apple has used in its Mac lineup for years. Intel appears to be having a difficult time with Apple's transition. Last week, the company launched an anti-M1 Mac ad campaign starring Justin Long, and now, Intel is pinning its hopes on...
Read Full Article • 306 comments

Thursday April 8, 2021 2:31 am PDT by Sami Fathi
Apple is facing a global shortage of certain components for some of its MacBook and iPad models, causing the Cupertino tech giant and its suppliers to postpone production of the products, according to a new report from Nikkei Asia. According to the report, MacBook production is being hindered due to the shortage of chips mounted onto the circuit board before final assembly, which is a key...
Read Full Article • 121 comments

Friday March 12, 2021 11:32 am PST by Joe Rossignol
In a research note shared with MacRumors today, Barclays analysts said they expect Apple to report record Mac shipments in the 2021 fiscal year. Apple has seen strong demand for Macs driven by the COVID-19 pandemic and the release of Apple silicon Macs. With rumors indicating that Apple plans to release redesigned 14-inch and 16-inch MacBook Pro models with Apple silicon in the second half...
Read Full Article • 75 comments

Tuesday March 30, 2021 12:35 am PDT by Sami Fathi
Apple has booked the initial production capacity of 4nm chips with long-time supplier TSMC for its next-generation Apple silicon, according to industry sources cited in a new report today from DigiTimes. From today's report: Apple has already booked the initial capacity of TSMC's N4 for its new-generation Mac series, the sources indicated. Apple has also contracted TSMC to make its...
Read Full Article • 101 comments