Apple today announced that it has purchased the worldwide distribution rights to "The Velvet Underground," a documentary from Todd Haynes. 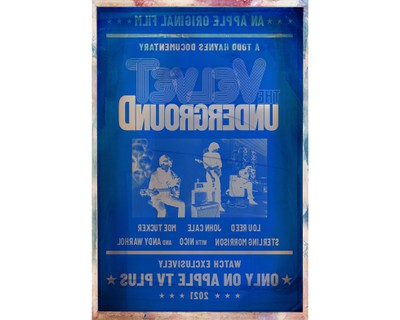 "The Velvet Underground" will feature never before seen performances and recordings, Warhol films, experimental art, and in-depth interviews with key players of that time.

The Velvet Underground created a new sound that changed the world of music, cementing its place as one of rock 'n' roll's most revered bands. Directed by acclaimed filmmaker Todd Haynes, "The Velvet Underground" shows just how the group became a cultural touchstone representing a range of contradictions: the band is both of their time, yet timeless; literary yet realistic; rooted in high art and street culture.

There's no known release date for "The Velvet Underground" at this time, but it joins several other documentaries that Apple has picked up such as Werner Herzog's "Fireball: Visitors from Darker Worlds," "Boys State," "Beastie Boys Story," "Dads," and "The Elephant Queen."

yawn, apple tv + excusive for a limited audience. many apple tv owners most likely never heard of velvet underground or even care about this

The Velvet Underground's first album only sold 30,000 copies during its first five years but “everyone who bought one of those 30,000 copies started a band.” -Brian Eno

There is plenty of content based on things someone somewhere never heard of. The simple truth is that this band was incredibly influential on the rock music of the 20th century, and beyond. It doesn’t matter if you or I like them subjectively, or if we are even familiar with them.

I look forward to being entertained and educated by this.
Score: 8 Votes (Like | Disagree)

This ought to be interesting.

Is there a reason that the artwork is reversed?

Looks like a plate that they'd use to do offset printing of a poster. (It's not just reversed, it's a negative as well.) Maybe the idea is to reflect the "behind the scenes" nature of the documentary?
Score: 8 Votes (Like | Disagree)

citysnaps
Looking forward to this!
Score: 8 Votes (Like | Disagree)

Zen_Arcade
One of the two most influential rock bands.

I hope the documentary is awesome!
Score: 7 Votes (Like | Disagree)

folp02
The Velvet Underground are definitely not for everyone, but they are one of the greatest bands ever. Can't wait to see this!
Score: 5 Votes (Like | Disagree)

Looking forward to this!

...and somewhere near a still telephone, Roger Waters and Jimmy Page are squirming with anticipation.
Score: 4 Votes (Like | Disagree)
Read All Comments