Adobe Brings Illustrator to the iPad

Adobe last November introduced Photoshop for the iPad, and now another major Adobe app is making its way to Apple's tablet with the launch of Adobe Illustrator for iPad. 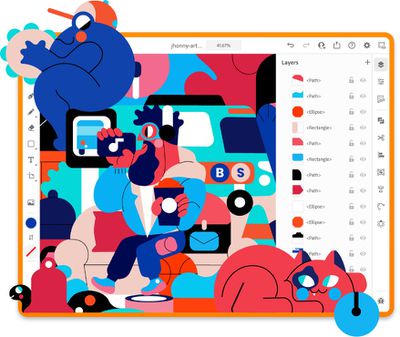 Adobe aimed to make Illustrator for ‌iPad‌ intuitive and simple to use without sacrificing key Illustrator tools. Adobe says that while the interface seems simple when you first launch the app, additional capabilities become available as you work. Adobe focused on seamless connections across devices and file interoperability, so files created on ‌iPad‌ can be opened on the desktop and vice versa.

Drawing with Illustrator for ‌iPad‌ is simpler than on the desktop thanks to the ‌Apple Pencil‌, making it easier than ever to create graphics. Illustrator for ‌iPad‌ adds new features like radial, grid, and mirror repeat for a unique tablet design experience that makes it easy to create patterns, plus it takes unique advantage of the ‌iPad‌'s camera.

Adobe says that the launch of Illustrator is "just the beginning" of the journey, with plans to add additional features like effects, more brushes, options to turn sketches into vector graphics, and more.

terminator-jq
Seems like a good app for people locked into the Adobe ecosystem or for those required to use Adobe tools. For anyone else I just have two words: Affinity Designer

One time payment, No account required, fantastic UI, great updates and full compatibility with the desktop Mac version so you can easily pass files back and forth...
Score: 8 Votes (Like | Disagree)

and it can be purchased standalone for $9.99 a month.

mono1980
Indesign please.. As far as I'm aware there still isn't a single decent publishing app for the iPad...
Score: 6 Votes (Like | Disagree)

MadGoat
It's ok, but for vector graphics, there are a half dozen better apps, designed from the ground up as a touch/pencil vector design program. Affinity Designer comes to mind as a leader in iPad vector tools.
Score: 6 Votes (Like | Disagree)

PlainviewX
I can't believe it took this long. Adobe has a lot of catching up to do.
Score: 4 Votes (Like | Disagree)

arvinsim
I prefer the one time purchase of Affinity Designer.
Score: 2 Votes (Like | Disagree)
Read All Comments

Tuesday March 30, 2021 10:15 am PDT by Hartley Charlton
Adobe has today announced the launch of a new iPad app bundle, including Photoshop, Illustrator, Fresco, Spark Post, and Creative Cloud at half price. In a new blog post titled "Everything's coming together for mobile creativity," Adobe set out its vision for the future of creative productivity on the iPad, explaining that "The combination of an iPad and the remarkably precise Apple Pencil...
Read Full Article • 64 comments

Tuesday February 9, 2021 9:23 am PST by Juli Clover
Adobe today updated its Photoshop, Illustrator, and Fresco Creative Cloud apps to introduce a new "Invite to Edit" feature that allows for asynchronous editing between collaborators on all devices including desktop, iPad, and iPhone. Multiple collaborators are able to edit a single shared cloud document one at a time after saving .PSD or .AI files as cloud documents. Shared cloud documents...
Read Full Article • 22 comments

Tuesday December 8, 2020 2:58 am PST by Tim Hardwick
Adobe today updated Lightroom CC to version 4.1 in the Mac App Store to bring native support for Apple's new M1 Macs. Adobe has been working to bring its Creative Cloud apps to Apple's new Macs. Adobe announced the release of Photoshop Beta for Apple silicon last month and says it is working on a native version of Lightroom Classic for Apple silicon that will be released next year....
Read Full Article • 68 comments

Wednesday June 2, 2021 8:22 am PDT by Sami Fathi
In an attempt to rival the iPad Pro and iPadOS, Huawei today launched three new tablets as part of its "MatePad" tablet lineup, including a new 10.8-inch and 12.6-inch MatePad Pro and the MatePad 11. Image Credit: The Verge As The Verge reports, all three devices are the first Huawei tablets to run its own "HarmonyOS" operating system, announced earlier in 2019. In addition, the smaller...
Read Full Article • 110 comments

Monday August 17, 2020 11:30 am PDT by Juli Clover
Adobe holds an annual event called Adobe MAX each year to highlight new Adobe software releases for design and advertising professionals. Adobe MAX normally takes place in person, but like many events, the 2020 conference will be held digitally from October 20 to October 22. Adobe MAX 2020 is a free event for everyone who wants to attend, and registration is open as of today. Those...
Read Full Article • 18 comments

Tuesday April 13, 2021 6:00 am PDT by Hartley Charlton
Adobe has today released a major update for Premiere Rush, adding full support for the M1 chip, alongside a range of small updates to Premiere Rush and Premiere Pro. Premiere Rush is Adobe's video editing app designed for easy creativity on the go. The update to Premiere Rush brings enhanced speed and optimization on desktops using the M1 chip, such as the MacBook Air, the 13-inch MacBook...
Read Full Article • 21 comments

Monday January 24, 2022 7:12 am PST by Sami Fathi
Three months after their launch, the 14-inch and 16-inch MacBook Pros continue to experience high demand and seemingly short supply, with shipping dates for both models stretching into multiple weeks in several of Apple's key markets. In the United States, the baseline 14-inch MacBook Pro with the M1 Pro chip is estimated to ship in three to four weeks, promising an arrival by at least...
Read Full Article • 201 comments