Adobe is today launching its long-awaited Photoshop for iPad app, one year after first announcing plans to bring the desktop version of Photoshop CC to Apple's tablets.

The Photoshop on ‌iPad‌ app is designed to let Photoshop desktop users open and edit PSDs right on their tablet devices, with the ability to see and edit layered documents and access key Adobe tools with touch gestures. 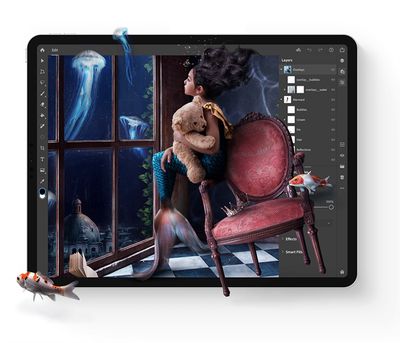 The app will be familiar to Photoshop users thanks to the standard Photoshop toolbar on the left and a layers interface on the right, both of which are optimized for a touch interface. Adobe has built-in tours and video tutorials to get users started with the app.

Photoshop for ‌iPad‌ was designed with touch and mobility in mind, but it was built using the same code base as Photoshop on the desktop so users don't need to worry about conversions, compressions, or importing or exporting when swapping between the ‌iPad‌ and the desktop. All edits will produce the same results across devices.

According to Adobe, today's launch of Photoshop for ‌iPad‌ is just the beginning of a more extensive plan to expand the capabilities of Photoshop on tablets.

The first version of Photoshop for ‌iPad‌ focuses on top workflows, compositing, and masking and retouching, with additional functionality to be introduced in the future as Adobe better learns how customers use Photoshop on a mobile device.

Adobe says that new capabilities will be added "as quickly as possible" with a regular cadence of releases after Adobe MAX 2019. "We know we have more work to do," reads Adobe's blog post announcing the launch of Photoshop for ‌iPad‌. Adobe is encouraging Photoshop for ‌iPad‌ users to join its community forums to discuss potential new features.

The app can recognize the subject of a photo, provide recommendations, and automatically apply complex adjustments to produce the best possible photo. The app will also include a "curated feed of lenses" created by artists and influencers like Billie Eilish.

Substance90
Still subscription based? No thanks, I'll stick to Affinity Photo and Designer.
Score: 48 Votes (Like | Disagree)

jmpage2
How can Macrumors do this big of an expose on a flagship product like Photoshop and not mention cost? Many of us have parted ways with Adobe over their aggressive subscription model that hurts casual users of their software who otherwise might buy a discounted license of the software and use it for several years.
Score: 47 Votes (Like | Disagree)

RogerWilco
“We know we have more work to do”

So do I, and Adobe's cloud-based subscription apps are being removed from my workflow.
Score: 38 Votes (Like | Disagree)

JosephKing
Will never used subscription-based. Good luck to those that do.
Score: 24 Votes (Like | Disagree)

Will never used subscription-based. Good luck to those that do.

I don't need any luck, Adobe CC works great for me. Adobe Photoshop used to cost £550-£650 here in the UK. With the subscription it costs around £120 a year and I always have the latest version of Photoshop & Lightoom. It's a good deal.
Score: 15 Votes (Like | Disagree)

Seriously. Those guys have made the perfect alternatives to a photoshop and illustrator. Get the Mac versions and get the iPad versions and your good to go. Perpetual licensing and the iPad apps and Mac apps are nearly identical meaning you can open up a file on iCloud Drive - do some work- then continue the same file on Mac.
Score: 14 Votes (Like | Disagree)
Read All Comments