Apple Online Store Goes Down Ahead of iPhone 12 Apple Event

Apple's online store is down in anticipation of its "Hi, Speed" event later on Tuesday, suggesting at least some products may be available to pre-order or order immediately after the event. 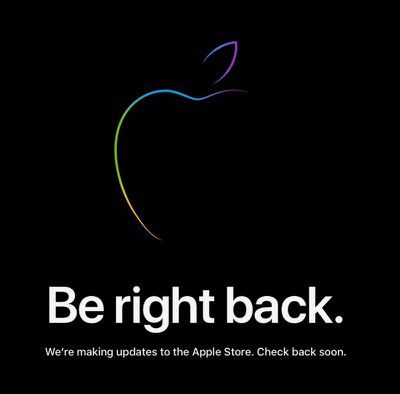 The placeholder for the U.S. online store says "We're making updates to the Apple store. Check back soon."

Apple's "Hi, Speed" event will be a virtual media event, where the company is expected to take the wraps off its flagship iPhone 12 lineup, a smaller, more affordable HomePod, and potentially other products.

We've heard conflicting rumors about when Apple's new iPhone models will be available to order, but Apple is expected to stagger the launches this year, and we're not expecting ‌iPhone‌ pre-orders to open immediately.

With other rumored products also said to be in the wings, including a "HomePod mini," Apple could well be setting up its store to accept pre-orders. On the other hand, it may simply be adding promotional pages in advance of later product pre-order dates.

Either way, we'll know for sure soon. Apple's media event kicks off at 10:00 a.m. Pacific Time, and you can tune in on Apple's event page, on Apple's YouTube channel, or through the TV app on Apple's various platforms. Stay up to date on all the latest news and developments right here on MacRumors!

🔥 Visit our Live Coverage of the Apple Event

ohbrilliance
I remember the good old days when the We’ll Be Back Soon was met with comments like “it’s happening!”. I don’t know about you but I’m here to try and enjoy the news. If it bothers you so much then why are you even here?
Score: 13 Votes (Like | Disagree)

mthomas184
Man, it cracks me up watching everyone whine when Apple does this. Like they planned on going to the store and buying something right now. :rolleyes:
Score: 12 Votes (Like | Disagree)

So, that's more than 6 hours of daytime (in Europe) selling they throw down the drain, not just for one product, but for all their products and accessories.

Here we go again. The idiotic 'store goes down for 6 hours' crap. Why anyone thinks this makes sense in today's world is beyond me.

And by the way, Apple gets rid of magsafe and the external battery indicator led (two things I thought were ingenious and useful) in the name of 'progress' ... yet they keep on with this stone-age theater of shutting down the site to update a few products.

It's for show. It's like having a big curtain on stage before the show. They're a $2 trillion company. I'm sure they've crunched the numbers to determine that the hype is worth it.

After all, do they really lose any sales? If you're looking to buy a Mac or an iPad right now, are you going to completely change your mind and abandon your purchasing plans just because the site is down for one morning, or are you just going to come back later? Plus, when you come back, now you see all the new stuff that's featured.

All I'm saying is that it's safe to assume that Apple knows a bit more about marketing hype and sales than you or I.
Score: 11 Votes (Like | Disagree)

s66
So, that's more than 6 hours of daytime (in Europe) selling they throw down the drain, not just for one product, but for all their products and accessories.
Score: 6 Votes (Like | Disagree)

Here we go again. The idiotic 'store goes down for 8 hours' crap. Why anyone thinks this makes sense in today's world is beyond me.

Tuesday September 14, 2021 6:10 pm PDT by Juli Clover
Following the announcement of the iPhone 13 mini, iPhone 13, iPhone 13 Pro, and iPhone 13 Pro Max, Apple is allowing customers to get ready for pre-orders, which are set to take place on Friday, September 17 at 5:00 a.m. Pacific Time. Existing and new iPhone Upgrade Program members can use the Apple Store app on the iPhone or Apple's website to go through all of the pre-approval steps to get ...
Read Full Article • 185 comments

Monday September 20, 2021 7:59 am PDT by Joe Rossignol
While it has been many years since Apple stopped providing first weekend sales numbers for new iPhones, Morgan Stanley analyst Katy Huberty today said that iPhone 13 Pro pre-orders are "off to a promising start" with "strong early demand." Huberty based her opinion off of Apple's delivery estimates for iPhones, which she has been tracking for many years. Shortly after pre-orders began last...
Read Full Article • 66 comments

Thursday September 16, 2021 3:56 am PDT by Tim Hardwick
Update: As of 5:30 a.m. Pacific Time, the "Expired Pre-Order" issue appears to have been fixed for many Apple customers. Some Apple customers who went through the pre-approval steps to purchase a new iPhone 13 on Apple's website or Apple Store app are seeing the message "Your iPhone pre-order has expired" when subsequently checking their order status page. Apple customers can use the...
Read Full Article • 92 comments