Earlier today, Chinese leaker "Kang" shared allegedly accurate information for the products set to be announced at the upcoming Apple event on October 13, including details on the full iPhone 12 lineup. 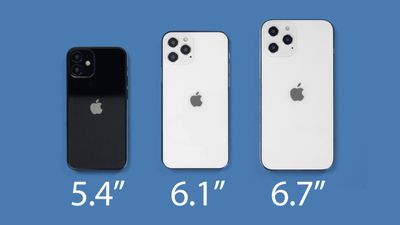 According to the leaker's information, which was later modified with corrections for product availability timeframes, the 5.4-inch "‌iPhone 12‌ Mini" will be available to preorder on November 6 or 7, with a launch date of November 13 or 14.

Meanwhile, the 6.7-inch iPhone 12 Pro Max will allegedly be available to preorder on November 13 or 14, with a launch date of November 20 or 21.

Bloomberg believes that Apple will stagger the iPhone launches in 2020, while DigiTimes has previously suggested the two 6.1-inch ‌iPhone 12‌ models could come out first in October, with the 6.7 and 5.4-inch models to follow. Leaker Jon Prosser today has also claimed DigiTimes was correct earlier in the year.

It's worth noting that Apple traditionally doesn't open ‌iPhone‌ pre-orders or launch products at weekends, and some of the initial dates in the two-day timeframes provided by Kang – November 7, November 14, and November 21 – fall on Saturdays. Depending on the time of day when preorders kick off, a Friday in the U.S. could already be Saturday in some parts of the world, although the actual launches typically occur on Fridays no matter the location.

With likewise adjustments, pre-orders for the 6.1-inch ‌iPhone 12‌ and ‌iPhone 12‌ Pro models could begin on October 16, the Friday immediately following Apple's "Hi, Speed" event, and the first ‌iPhone 12‌ shipments and an official launch could happen on Friday, October 23.

Of course, nothing is certain, but we'll know for sure when the ‌iPhone 12‌ lineup is announced at Apple's event on Tuesday, October 13 at 10:00 a.m. Pacific Time.

Really... you're not buying it at all.

People have been waiting for a small modern iPhone for years. And it's finally coming.

But since it's not available by some arbitrary date.... you're just done with it. Completely.

Bring Back the Gun

The actual device takes up a smaller floor print that the 4.7” screens. Hence the name mini

Earlier you said "no Mini on October 16... no buy..." which I found odd. Who cares when you can buy it? Just be glad that the Mini is finally coming.

But now you're talking about the price difference between the 12 mini and the cheaper SE... which is a completely different argument.

HeavenDynamic
3 launches for 4 models? Come on...
Score: 8 Votes (Like | Disagree)

bbates123
Gotta wait another month for the Mini...boo!
Score: 8 Votes (Like | Disagree)
Read All Comments