Between last month's introduction of the iPad Air with Apple's new A14 chip and tomorrow's expected unveiling of the iPhone 12 said to feature the same chip, Apple executives have been making the rounds talking up the technology behind the A14 and the company's overall chip strategy. 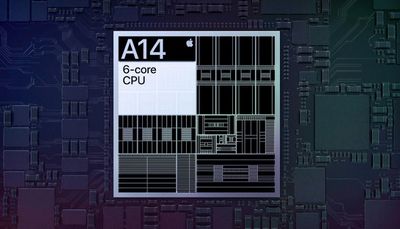 In a new interview with Engadget, Apple's vice president of platform architecture Tim Millet and senior director of Mac and iPad product marketing Tom Boger walked through how Apple has leveraged its ability to customize its own chips to focus on both energy efficiency and performance. Those competing priorities gain some new headroom with the A14 thanks to its transition to a smaller 5nm manufacturing process that packs more transistors into the same chip area and allows them to run at lower power.

“We saw the opportunity to do things that would have been impossible to do with a conventional CPU instruction set,” Millet said. “You could in theory do many of the things the Neural Engine does on a GPU, but you can't do it inside of a tight, thermally constrained enclosure.”

On a broader level, Millet and Boger discussed how Apple's chip architecture team thinks about Apple's entire product portfolio, envisioning how its chips can be used not just in a single product but in multiple products over time.

When people at Apple start working on a chipset, they're not solely focused on building one for a single product; they take into account the company's entire lineup. “We spend a lot of time working with the product teams and software teams, and the architecture group really does sit in the center of that,” said Millet. [...]

“Ultimately, we want to make sure that when we build a CPU for one generation, we’re not building it necessarily only for one,” he said. While that doesn’t mean you’ll see the A14’s six-core CPU in something like an Apple Watch, the architecture developed for the company’s flagship phone chipset may well be adapted and reused elsewhere.

With the upcoming launch of Mac products based on Apple Silicon, we'll be seeing even more fruits of the chip team's labor, although Millet and Boger were unsurprisingly not ready to delve into discussions on that topic just yet.

For more on the A14 and Apple's in-house chip work, check out the full piece over at Engadget.

I designed many CPUs for AMD.

cmaier
Not much news in the actual interview, looks like. Although this is misleading:

It's important to note, however, that real-life performance gains don't always live up to Apple's promises. When the company says the A14's CPU is 30 percent more powerful than the current iPad Air's A12 chipset, for instance, it isn't going off results from popular benchmarking tools you and I have access to. According to Boger, those figures are an amalgamation of "real-world application workloads." In other words, they're composite numbers derived from many different performance factors -- all to demonstrate what it’s like to actually use this thing.

“Has no idea what Apple will release...
But knows his is much kewler, as evidenced by his ’leet skillz at Overwatch.”
Score: 23 Votes (Like | Disagree)

JPack
Both of these folks come from a marketing background. There is no valuable insight given.

At least provide Anand to interview so we can hear something meaningful.
Score: 16 Votes (Like | Disagree)

Well, I’m a pro gamer and an aspiring Twitch variety streamer, including playing Overwatch and DJing EDM. Apple chips are whack compared to Kirin and AMD. You ain’t going to outspec my gaming rig.

You can put that back in your pants, nobody has any interest in comparing. Apple has the capacity to stomp all over AMD if they choose to do so, but they’re not really aiming at the comparatively tiny gamer PC market, now, are they?
Score: 15 Votes (Like | Disagree)
Read All Comments