Email aliases in the Mail app don't appear to be functioning correctly in the iOS 14 update, according to multiple customer complaints on the MacRumors forums and the Apple Support Communities. 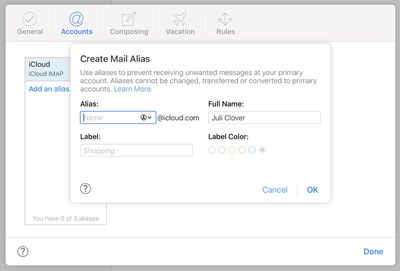 Affected customers have set up aliases in the Mail app for subscriptions, account signups, and more, as aliases are useful for concealing a primary email address and limiting unwanted messages. Those aliases are not working as intended as of the iOS 14 update, with the Mail app on iPhone and iPad ignoring the preferred alias that's selected when sending an email.

There appears to be no way for affected users to successfully control which alias is selected, leading to emails sent from unwanted addresses. A member of the Apple Support Communities describes the problem:

I have an IMAP account (not gmail) with a few aliases. I have been using this for YEARS and it's always worked fine. Today, I sent my first email from iOS 14 and it changed my from address after I sent the email. Note, the correct address was selected in Mail - it was changed during sending. I then sent some mails from other aliases, and those were also all wrong - never the right address.

I then double checked on my iPad, and the same thing occurs. For now, I have just removed all aliases.

Many of the complaints are from iCloud users who are using aliases with Apple's ‌iCloud‌ mail service, including those who have an older @mac.com or @me.com alias available to use with their @iCloud.com email addresses. Apple's Mail app appears to default to the @iCloud.com email address instead of the properly selected @mac.com that some users prefer. From the MacRumors forums:

One of the few who still uses @mac.com for the email address. After the upgrade I am noticing that the from address defaults to @icloud.com even though the settings still points to @mac.com address. Not sure if anyone here is noticing that.

The problem also affects email aliases associated with non-iCloud accounts, including those set up with Gmail accounts, so there appears to be an issue with all email accounts that have an associated alias that causes the Mail app to pick a random "From" address.

There seems to be no fix or workaround at this time aside from disabling aliases, and as pointed out on the MacRumors forums, the problem continues to persist in the iOS 14.2 update that's in beta testing. We expect iOS 14.2 to be in beta for at least another few weeks (likely until the iPhone 12 models launch) so there's time for Apple to add additional bug fixes.

astrorider
Bugs like this are why Apple should allow downgrading major releases, at the very least for a month after release. I upgraded immediately to iOS 14 upon release and after a couple days noticed this problem sending emails from my Gmail and iCloud aliases. I only caught it when a work contact replied to my message, and I saw the wrong address in my quoted text of their reply! I use email heavily for work on the go so this would have been a major disruption, but thankfully I could downgrade before Apple stopped signing iOS 13. I'm lucky I caught it in time, but everyone should have the option to downgrade for longer than the current 1 week.
Score: 7 Votes (Like | Disagree)

btrach144
Apple is getting sloppy as of late
Score: 3 Votes (Like | Disagree)

dontwalkhand
My @Mac no longer works. @me works and @icloud doesn’t. Lovely.
Score: 2 Votes (Like | Disagree)

Apple has been so sloppy lately.
Score: 2 Votes (Like | Disagree)

Ah well the bugs continue... I'll stay on Mojave for another few months.

Apple has been so sloppy lately.

I don’t think macOS is affected. I sent an email from the Mail app on my MBP running the latest Catalina release. The correct alias registered as the sender when I checked my Gmail.
Score: 2 Votes (Like | Disagree)

bankshot
Appreciate the heads up. I use my own domain for email, giving me unlimited addresses, so I use several aliases to send from depending on my recipient. Thankfully I haven't sent any email from iOS since upgrading last week, and now I'll have to test.

It sounds like someone must have gone in and changed code handling mail sending, and simply grabbed the primary address instead of the selected alias. Probably didn't even realize that aliases were a thing (configuration is pretty buried in Settings), and clearly Apple didn't have a proper regression test case for this feature.

This is frustrating, as Mail is a core feature that needs to be 100% reliable, but it clearly isn't a priority for Apple. Past versions of iOS have always seemed to either break something or made it worse in some small way (refreshing IMAP accounts no longer happens automatically like it used to several versions ago). I don't mind a relative lack of snazzy new user interface features, but for goodness sake, don't go mucking around in the back end code and breaking things every revision!
Score: 2 Votes (Like | Disagree)
Read All Comments