Apple has today unveiled two new children's programs titled "Stillwater" and "Doug Unplugs" that will be coming to Apple TV+. 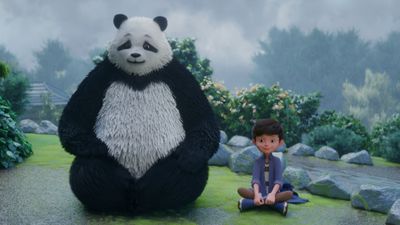 Stillwater is an animated series based on the book series "Zen Shorts" by Jon J. Muth. The series centers on three siblings who have a wise panda, called Stillwater, as their next-door neighbor.

The panda provides children with "a deeper understanding of their feelings, as well as mindfulness tools that help them face their own day-to-day challenges" through stories and humor. The character also "brings newfound fun and adventure for the three, opening their eyes to the quiet wonders of the world around them, and guiding them to their place within it."

The report also outlined another new show called "Doug Unplugs," a story about a young robot "who senses there's more to life than just the facts. While other robots plug in for their daily download, curious Doug unplugs and journeys into the human world, and with his best friend Emma, experiences its wonders firsthand."

The DreamWorks Animation production for ‌Apple TV+‌ is based on the "Doug Unplugged" book series by Dan Yaccarino, and is set to premiere on November 13. The cast features Brandon James Cienfuegos, Kyrie McAlpin, Eric Bauza, Mae Whitman, Leslie David Baker, and Becky Robinson.

Apple also confirmed that the second seasons of "Ghostwriters" and "Helpsters" will premiere on October 9 and October 16 respectively.

So, Po's a pacifist now I guess?

The first thing that popped into my mind when seeing the panda was that Apple has been lured into panda propaganda by the PRC.
Score: 2 Votes (Like | Disagree)

dwaltwhit
Helpsters is refreshing. its like what kids graduate to after sesame street.
Score: 1 Votes (Like | Disagree)
Read All Comments

Thursday January 26, 2023 6:30 am PST by Tim Hardwick
The new Mac Pro coming later this year is expected to feature the same spacious modular design as the 2019 model, but with fresh concerns over its lack of upgradeability surfacing, some users are beginning to wonder what the transition away from Intel architecture actually means for Apple's most powerful Mac. The current Intel Mac Pro that Apple sells is popular with creative professionals...
Read Full Article • 519 comments