Apple today seeded the sixth beta of the upcoming macOS Big Sur update to developers for testing purposes, two weeks after releasing the fifth beta and more than two months after the new update was unveiled at the Worldwide Developers Conference. 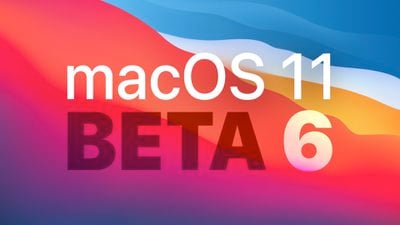 tkermit
ugh, they still haven't gotten rid of that stupid hover effect where the background and shadow of a title bar will only appear after mousing over it for a second or two (or scrolling) in apps like Finder, Disk Utility and TextEdit (in plain text mode). The UI has become super busy when moving your cursor over elements in a way that is very reminiscent of Windows. Scott Forstall would have had a word to say about that.

Will Sigmon
Finally available on my 2020 iMac! Installing soon - will report back.
Score: 6 Votes (Like | Disagree)

Just wanted to update you on progress of iMac 2020 install. After a lot of trying I was able to get it installed.

My troubleshooting(not something you have to do but can try:

* I went into Disk Utility and ran first aid on everything I could. Did this in recover mode and from normal app.
* In recover mode and checked that secure boot was turned on
* In finder I searched "macOS" under this Mac. Found and deleted the installer(new installer, but later found Apple pushed a slightly newer version a few hours ago)
* Unenrolled myself from the developer program and re-enrolled after
* Double checked that macOS installer was deleted again
* Ran first aid on disks again to be safe
* Under "Energy Saver" turned Prevent computer from sleeping on and set "Turn display off after" to Never so the display and computer wouldn't go to sleep after starting the process from scratch again.

No you don't have to do all of this but I tried all of this and it ended up working. One thing I noticed was earlier on it would download about 20 to 30% of the download consistently and then it stopped every 10 seconds and then download it again and then stopped again. After I did everything above it consistently downloaded the entire update with no issues and I went through the Installer process. The when the installer was up and running I checked the version of it and it had changed from earlier versioner which made me feel more confident on proceeding for the 4th time.

Hope some of this helps. If you need more assistance let me know. Best of luck!

sniffies
Finally!! Beta 5 was getting buggier and buggier by the day.
Score: 5 Votes (Like | Disagree)

Want to install this on my 2020 iMac, except when I install the profile I get...


"The requested version of macOS is not available." which is fun. That is with the beta utility installed and active.

I think beta 6 is so far only available via delta update. The full installer isn’t available yet. Don’t know if it will be, but I expect that it will be. Maybe just wait a bit longer and see. It is considerably bigger than the delta update, so maybe it is taking apple longer to get it on their servers.
Score: 4 Votes (Like | Disagree)
Read All Comments