Apple's iPhone cameras could in future adopt circuit boards based on liquid crystal polymer (LCP) in order to allow them to transmit high-resolution images at higher speeds, according to industry sources in Apple's supply chain (via DigiTimes). 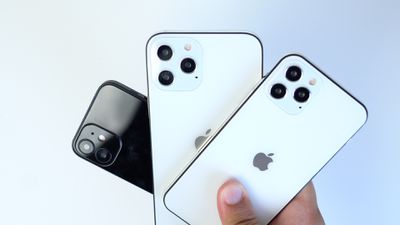 The use of LCP-based flexible PCBs in camera lens modules has been linked to the introduction of high-speed 5G in Apple's smartphone lineup, as well as to the increasing prevalence of live-streamed video and augmented reality apps.

LCP PCBs may also be massively adopted in iPhone camera lens modules in the future to support high-speed image transmission, the sources said, reasoning that image data will be increasingly complicated in the 5G era and high-speed transmission will be needed to allow high-resolution images in live streaming and AR applications.

The tidbit appears in a report concerning the increased activity of Apple's supply chain partners to provide volume production of mmWave antenna boards for iPhones in 2021. mmWave, which also uses LCP-based PCBs, is the fastest 5G network technology that carriers are currently rolling out.

At least some iPhone 12 models this year are expected to support mmWave, but the report isn't clear on when Apple's iPhones are expected to include LCP-based camera module PCBs capable of faster image transmission.

In addition, rumors suggest at least one of the new ‌iPhone‌ models coming in 2020 will feature a 3D camera, which sounds like the LiDAR Scanner feature that Apple added in the 2020 iPad Pro models. LiDAR is essentially able to map the surrounding environment at the photon level at nano-second speeds.

h3ysw5nkan
The thing is iPhone's petty storage will not support 4K at 240fps very well unless you sell your kidney over it.
Score: 10 Votes (Like | Disagree)

jclardy
I hate how 5G is used in marketing speak all over now. 5G is not at all the driver for this. An iPhone 11 Pro of today could already saturate a 5G connection with video data upload if it had a 5G modem.

The real reason for this is on-device machine learning - the faster data can get to the CPU, the more latency is removed from any post-processing effects on that video when sent to the display. That plus calculating geometry for AR applications, combining the lidar sensor data with the live video feed.
Score: 6 Votes (Like | Disagree)

The thing is iPhone's petty storage will not support 4K at 240fps very well unless you sell your kidney over it.

The bandwidth needed for that too. Ooft.

Apple's already got most of my money - organs are probably the next thing they can take.
Score: 4 Votes (Like | Disagree)

teeoh717
Uh, cool and all... but can we for the love of god please move past USB 2.0 transfer speeds out of the only I/O port on the phone? I just want to transfer hardwired (not AirDrop or cloud syncing) without ripping all of my hair out. Is that so much to ask in 2020? TWENTY YEARS later after USB 2.0 was introduced??
Score: 2 Votes (Like | Disagree)
Read All Comments