Apple blocked Facebook's attempt to tell users about the 30% fee that Apple would take of all in-app purchases made through a new online events feature, Facebook has told Reuters. Apple reportedly told Facebook the update violated an App Store rule that prevents developers from showing "irrelevant" information to users. 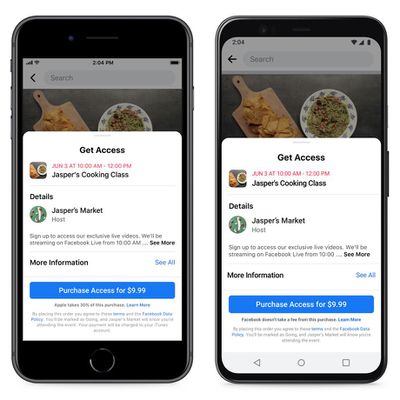 Facebook planned to launch a new tool in its app that lets online influencers and other businesses host paid online events as a way to recoup revenue lost during the global health crisis. The feature lets Facebook users buy tickets for the events directly through the app.

Apple's long-standing ‌App Store‌ rules say the iPhone maker takes a 30% cut of all in-app purchases. When Facebook asked Apple to waive the fee so it could pass on all events revenue to business owners, Apple reportedly declined.

The feature is now available in the Facebook app, just without the message notifying users about Apple's 30% fee. The image above was released by Facebook earlier this month to show what the message would have looked like.

Facebook reportedly intended to show a message on Android that read "Facebook doesn't take a fee from this purchase," but Reuters said the message doesn't appear in the version of Facebook currently available on the Google Play Store.

"Now more than ever, we should have the option to help people understand where money they intend for small businesses actually goes. Unfortunately Apple rejected our transparency notice around their 30% tax but we are still working to make that information available inside the app experience," Facebook said in a statement.

Apple did not respond to a request for comment.

Nothing about Apple's actions is new here – the company has been consistent in preventing other apps like Netflix and Spotify from discussing ‌App Store‌ policies, such as explaining that users could pay for their services via the web without Apple taking a cut.

What's different in this case is that by previewing the message ahead of submitting it to Apple's ‌App Store‌ review process, Facebook is clearly looking to fuel debate about the way Apple polices apps on its iOS platform, at a time when Apple is already facing antitrust lawsuits and government probes over alleged anticompetitive actions.

One particularly vocal critic has been Fortnite creator Epic Games, which has repeatedly referred to the ‌App Store‌ as a monopoly. Earlier this month, Apple removed Fortnite from the App Store after ‌Epic Games‌ introduced a direct payment option in the app for its in-game currency, violating ‌App Store‌ rules. In an apparently orchestrated move, ‌Epic Games‌ promptly filed a lawsuit against Apple, accusing the company of anti-competitive behavior.

Spotify and Microsoft have since sided with Epic over the issue, and Facebook's latest action suggests they have picked up another ally in the increasing controversy over Apple's ‌App Store‌ policies.

aaronhead14
This is taking things too far. There's nothing wrong or irrelevant about letting customers know where their money is going.

ridgero
Transparency is not a bad thing.
Score: 53 Votes (Like | Disagree)

mdridwan47
The case against Apple's App Store Monopoly is getting stronger and stronger, thanks to Apple.

Seriously? "irrelevant" information? This is extremely relevant information especially when it comes to money.

Sellers will obviously wonder why they're getting 30% less and will assume Facebook took it. All these little things adds up to a pretty compelling case against Apple's App Monopoly.

An App is not the place where you should discuss details about your contracts with Apple. The user pays (in this example) $9.99. That's the relevant information.

If a user is paying for something, they have a right to know who benifits from having their money.
Score: 37 Votes (Like | Disagree)

This is taking things too far. There's nothing wrong or irrelevant about letting customers know where their money is going.

Apple knows their 30% is too high. They're scared.

If it's too high or not is not the question, but blocking this information is a ****** behavior IMHO
Score: 36 Votes (Like | Disagree)

This feature is for helping small businesses doing payment transactions for their live events, and users should know where a portion of their money goes.
Score: 29 Votes (Like | Disagree)
Read All Comments