Apple is exploring the use of flexible displays to make convex devices, according to a new Apple patent filing published today. 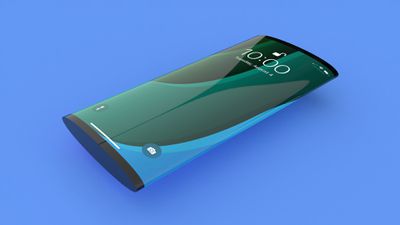 The application titled "Electronic devices with convex displays," was filed with the U.S. Patent and Trademark Office, and builds a picture of how an Apple convex-shaped device may work. Apple devices such as iPhone 11 and ‌iPhone 11‌ Pro have curved edges, and the patent explains that such "conventional arrangements" where "only the proportions of the device other than the display have a convex shape... may limit the internal volume of the device and detract from its appearance."

The convex device envisioned in the patent would have a front face and a rear face, with the display stretching seamlessly from one side to the other. The two remaining exposed edges would allow access to the inner housing. The filing explains that the main advantage of a convex device would be maximizing the internal volume, making more space available for the battery, for example.

Another area of interest for Apple is the capability for a convex device to potentially be more aesthetically pleasing. The patent explains that since users "may find a thinner device more desirable than a thicker device," a "convex housing shape may increase the internal volume of a device while preserving a sleek, thin look that is aesthetically pleasing."

Though devices with flexible displays have come to market as foldable smartphones, there has not been a commercial convex device of this kind before. Apple has been granted patents in the past for flexible OLED displays, foldable devices, and devices made from a single sheet of glass, and the area is a clear interest for the company.

Kobayagi
So these with bigger screens. :)

AngerDanger
Meh, wake me up when they patent a concave display.

Sharewaredemon
I find this interesting, but I also imagine a bar of soap and laugh.

I think the question is: Would a form factor like this be more, or less drop prone?