Apple Patent Imagines iMac Made From a Single Sheet of Glass

Apple has all kinds of fanciful patents for imaginative devices that will likely never come to fruition, such as an iMac-like desktop computer made entirely of glass, which was shared last week in a patent published by the United States Patent and Trademark Office. 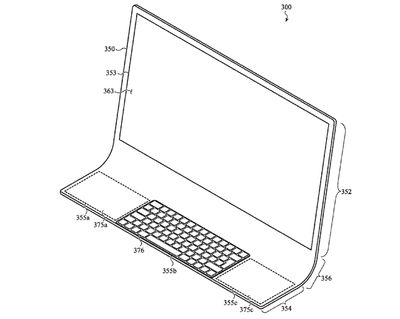 The lower section of the device rests on the desktop and is used for holding input devices, while the larger flat area serves as the display, with a stand at the back for propping it up and holding it in place. Given the thinness of the all-glass curved design of the Mac, the stand that holds it in place would be able to house necessary components and would also be able to be positioned differently to adjust the angle of the display.

The glass between the two sections of the device is described as flexible and able to change in angle between the display area and the input area. The input area is said to extend along a portion of the display area to form a "touchscreen-style display," and functionality such as wireless charging for other devices or data transfer capabilities could be included.

Apple separately describes multiple embodiments of the design, including one with a detachable, removable keyboard that fits over the lower portion of the glass design, which, when in place, allows the glass to detect the keystrokes.

This portion of the patent also highlights a camera that could be built into the glass of the enclosure, using an "optically transmissive material." Apple says that the design outlined in the patent could be made of glass, but the housing could also feature plastic or ceramic, as long as the material is light-transmissive.

The material for the design could have special features like scratch resistance, wireless charging support, or it could be able to allow touch and force to be detected through it. Apple also says biometric sensing capabilities could be included, detecting everything from fingerprints to heart rate, blood oxygenation levels, and temperature.

Because the patent describes both an "electronic device" and a "desktop computer," it suggests that this same design could be used for Macs or potentially an iOS device like an iPad. The patent goes into great detail about possible designs and functions, and further reading is available in the application on the US Patent and Trademark Office website.

Apple hasn't redesigned the iMac in some time, and although the patent appears to describe an iMac-like desktop computer, this probably isn't the implementation that we're going to see when Apple ultimately debuts a new ‌iMac‌ enclosure. Apple patents all manner of devices that never make it to production, but with curved glass and foldable devices becoming more popular, there is a possibility that we could see some of the functionality described in this patent at some point in the future.

PinkyMacGodess
This could be amazing. I wonder how much the base will cost. :oops:
Score: 12 Votes (Like | Disagree)

Seanm87
Everyone complains apple aren't innovating then complain when they do.
Score: 9 Votes (Like | Disagree)

Gorms
There was an episode of Black Mirror, first series I think, possibly about a woman who's partner died and he was a robot? Something like that. Anyways, in that episode they had some devices that looked similar to this idea and I remember looking at them at the time and thinking, "yep, that looks like a future iMac design". Good to see art and life still playing a game.

EDIT: before you type out your reply, yes i did read it and i stand by my comment.