Apple's Face ID feature that allows a device to be unlocked with a facial scan is limited to the iPhone and the iPad at the current time, but code found in macOS Big Sur suggests that ‌Face ID‌ may come to Macs in the future. 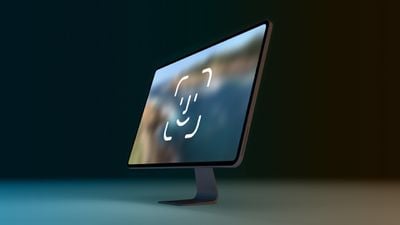 Adding a TrueDepth camera system and ‌Face ID‌ to the Mac would be a logical next step for the feature, and 9to5Mac located ‌Face ID‌ references in the latest Big Sur beta, including an extension with code to support a "PearlCamera" function.

"Pearl" is the codename that Apple has used for ‌Face ID‌ and the TrueDepth camera system since the feature first launched in the ‌iPhone‌ X.

There are "FaceDetect" and "BioCapture" references inside the extension, and those names certainly suggest a TrueDepth camera feature for Mac.

Right now, Apple's MacBook Pro and MacBook Air models use Touch ID, and have a ‌Touch ID‌ button built into the keyboard that's powered by the T2 chips in the machines. Apple's Macs have supported ‌Touch ID‌ since 2016 when the Touch Bar was first introduced in MacBook Pro models.

There's no word on when Macs might get ‌Face ID‌ support or which Macs will be first to get it, but there are some major design tweaks rumored for machines like the iMac, the ‌MacBook Air‌, and the MacBook Pro with the transition to mini-LED and Apple Silicon chips, so ‌Face ID‌ could be rolled out alongside of these updates.

It could also be a feature that will take longer to implement, and we've thus far heard no confirmed rumors on when Apple might make the transition.

AngerDanger
Huh, so that mockup looks a little different from what I was imagining, but it's still okay I guess.

It does make sense to start out with the iMac though, given that MacBooks already have built-in keyboards.

It's analogous to the iPhone lineup: TouchID for home button phones, FaceID for buttonless.

FSMBP
Did anyone think FaceID wasn't coming to Macs?
Score: 44 Votes (Like | Disagree)

zorinlynx
FaceID would be amazing for an iMac used by multiple people.

Imagine sitting down in front of your iMac and it automatically unlocks YOUR session (or logs in if you haven't yet). You don't even have to tell it who you are. When you get up, it locks the screen after a few seconds. It would be seamless.

I'm really surprised Apple hasn't done this yet since it's so obvious and would be such a cool "magic-like" feature, which we know Apple tends to be fond of.

PickUrPoison
Coming in the new Apple Silicon Macs (only). According to Apple it’ll take about two years to implement across the lineup. Completely expected.
Score: 13 Votes (Like | Disagree)

Mick-Mac
Back in the good old days, if someone wanted my password they would have to beat it out of me, and they wouldn't succeed. Nowadays, thanks to Apple, all they have to do is cut off my finger. With this new "advancement" now they also have the option of cutting off my head. Apple is making my life fraught with new dangers never before possible ;-).
Score: 12 Votes (Like | Disagree)
Read All Comments